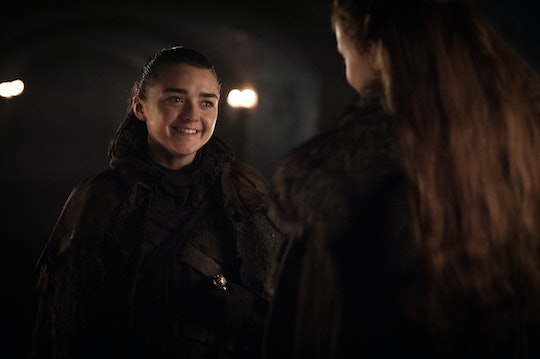 Littlefinger Is On Arya's Radar On 'Game Of Thrones'

Arya Stark is known for several things: the fact that she is "no one," her beloved sword called Needle, and her infamous kill list of people who have wronged her, her family, or her friends. But there's one major villain that seems to have escaped her notice. So is Littlefinger on Ayra's kill list on Game of Thrones? As of right now, he's still safe from her wrath, but that's probably just because she doesn't know about all the things he's done to lead to her family's destruction.

When Arya returned home to Winterfell and saw Sansa for the first time, she casually mentioned that she wished she had been the one to kill Joffrey because "however long my list got, he was always at the top," explaining to her mildly horrified and incredulous sister that she had a list of people to murder. Honorees include Cersei Lannister, The Mountain, Beric Dondarrion, Thoros of Myr, and Melisandre, as well as several minor characters who killed off several other minor characters that were friends of the world's favorite assassin. Though Littlefinger definitely deserves to be included on that list — and a large portion of the Game of Thrones fandom would love to see Arya slit his throat — he has managed to stay off her radar, for the most part, at least for now.

This is almost definitely because Littlefinger tends to operate in the shadows, and is a less obvious player than say, Ilyn Payne, who's on the list because he's the literal executioner who cut off Ned Stark's head on Joffrey's orders. If Arya knew that Littlefinger quietly threatened her father and fanned the flames of the discord that lead to his beheading, she probably would have killed him as soon as she got home, knights of the Vale be damned. As it is, Arya doesn't realize what a godawful person he is, and is potentially playing right into his hand.

Littlefinger is clearly trying to drive the Stark siblings apart, first by suggesting to Sansa at every opportunity he gets that she would be a better leader in the North than Jon, and now by planting incriminating notes from Sansa for Arya to find. One overlooked conversation between the sisters from Episode 5 is pretty telling about both of their characters and how they've grown from the horrors they endured. Arya suggested beheading the Northmen who questioned Jon's authority straight out, while Sansa pointed out that this is not the best way to work together as a unified entity. Arya has learned to be vicious, and Sansa has learned to be diplomatic.

But it looks like as far as Littlefinger is concerned, each Stark woman's traits might work against the other. Sansa might tend to give Littlefinger a little too much credence, while Arya's fight first ask questions later attitude could lead her to make an enemy of her sister. Let's hope he does make it onto Arya's list.