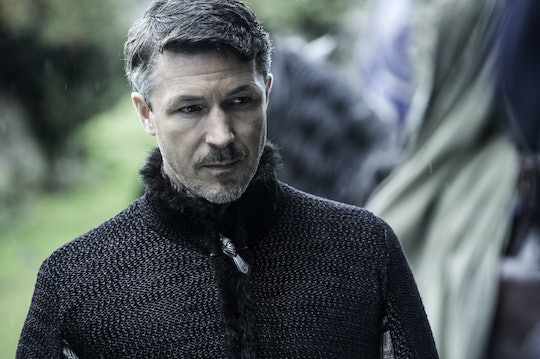 Is Littlefinger Trustworthy On 'Game Of Thrones'? Only If You're After The Same Thing

Of all the fascinating and complex characters on Game of Thrones, perhaps one of the most interesting is Petyr Baelish, otherwise known as Littlefinger, and all of his clandestine machinations. Littlefinger has always been a shadowy character with uncertain loyalties and bald ambition, out for himself above all others. He helped Sansa out of King's Landing, but then delivered her right into the hands of the worst human ever, Ramsay Bolton. He seems to be plotting something now that could benefit the Starks, but is Littlefinger really trustworthy on Game of Thrones?

Short answer: no. Ramsay once said, "If you think this story has a happy ending, you haven't been paying attention." Same goes for if you think you can trust anyone who's last name isn't Stark. (Except Arya. She's awesome, but I don't know if I'd trust her.) And you definitely probably shouldn't trust a guy who's made a name for himself on the show and in the books for being extremely untrustworthy. Baelish was born to a lowly and insignificant house, and throughout his life did everything in his power to climb higher than his status at birth. In the show we've seen him climb from brothel-owner, to Master of Coin, to Lord of the Vale. One thing we can always be sure of from Littlefinger is that he will always protect his own self-interest.

We saw this, for example, when we saw that he helped Sansa escape from King's Landing. While on the outset it seemed like he was trying to be kind, his true motivation was not kindness. As a Stark of Winterfell, Sansa is an important piece in the game of thrones, one that could be very beneficial to control, as we saw when Littlefinger used her to become Lord of the Vale and then sold her to Ramsay. Basically, Littlefinger is only trustworthy as long as his endgame aligns with our heroes'.

At the moment, it looks as though Baelish is attempting to rouse troops in the Vale to march toward Winterfell and help take it back from Ramsay Bolton. But to what end? Some redditors have theorized that Littlefinger plans to marry Sansa and thus become Warden of the North himself which would require him to kill Rickon, the oldest living male heir. But then what would have been the point in giving Sansa to Ramsay? Others believe that Littlefinger is a believer in the R + L = J theory, and wants to help Varys to reinstate a Targaryan on the Iron Throne, and that is why he wants Jon to take back Winterfell and thus come into a position of considerable power in Westeros. Some even theorize that Littlefinger is the one orchestrating the plot by Lord Umber to fake capture Rickon and swear fake loyalty to Ramsay Bolton, all in order to get rid of the Boltons in the end.

While all of this looks good (except the marrying Sansa part), it's still extremely unlikely that Littlefinger is doing any of this out of the goodness of his heart.