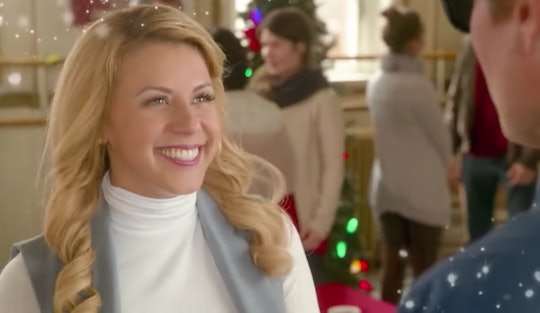 Hallmark's 'Entertaining Christmas' Is About A Martha Stewart-esque Brand

Unfortunately for those enamored by the Martha Stewart-esque Livingston, no, it's not a real brand. Entertaining Christmas tells the story of a young woman, Candace, played by Jodie Sweetin. Her mother, Claire, is "a cookbook author, crafting expert, and television personality whose name is synonymous with perfection" and the face of Livingston, according to Hallmark. With Christmas just around the corner, Claire announces that she is considering retirement, and that she wants Candace to step up to the plate as the head of Livingston.

Unfortunately for Candace, she doesn't take after her mom in the Martha Stewart skills department. As she attempts to give herself a crash course in basics like cooking and sewing, Candace is suddenly given the ultimate task: helping a child throw a party to welcome her father home from serving overseas, in lieu of Claire. While visiting the girl's small Vermont town, she becomes friends (and it's safe to say, eventually more than friends) with a handsome reporter named John, played by Brendan Fehr.

Earlier in the week, Jodie Sweetin spoke with NBC's New York Live to discuss the film, and why she is such a big fan of her character, Candace.

"My mom unexpectedly announces she will be retiring, and at the Christmas party, names me her successor, and that I will be taking over, and I go into a panic," Sweetin explained on the show. Even though she's excited about being sent to help welcome the young girl's deployed father home, she is "just afraid of screwing it up at every turn," Sweetin said. "So I'm trying to pretend the whole time that I'm something that I'm not, and of course fall in love along the way."

Sweetin also explained that she loved the story because she identified with the pressure to be perfect that her character faces. "It was a great story for me, because I related a lot to not having to be perfect, and to putting that pressure on yourself, particularly at the holidays, of wanting everything to be just right and just so," she said. "And really the story is about all of them finding out how to create the special moments without them having to be perfect, and just make them for yourself."

And in a Facebook Live interview for Hallmark Channel's Facebook page, Sweetin opened up about what the film taught her about Christmas and family traditions. "It is about finding out the things that mean the most to you," Sweetin said in the livestream. "It's really about finding the thing that works for you and connecting with your family and finding the memories. That's the important stuff."

So get your coziest blanket and your sweetest hot chocolate ready, because Entertaining Christmas premieres Saturday Dec. 15 at 8 p.m. ET on Hallmark Channel.