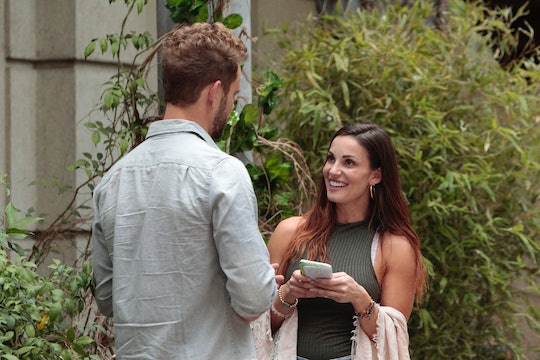 Liz Is Experiencing Some 'Bachelor' Backlash

Every single season of The Bachelor (or any of its numerous spin-offs) is bound to have its share of drama. That's just par for the course when you have 20-30 people vying for the love of one – confined to a single house, over the course of just weeks. On Nick Viall's season, much of the early drama centered around one particular contestant – Liz Sandoz, who had an unexpected history with this year's Bachelor. Despite wanting to reconnect with Nick and give romance another shot, Liz left during the most recent episode. But is Liz still watching The Bachelor?

Liz was unexpectedly cut from the show during the most recent Jan. 9 episode. After struggling to keep the secret of her one night stand with Nick at former Bachelor Nation alums Jade Roper and Tanner Tolbert's wedding, Liz finally broke down and confessed to fellow contestant Christen Whitney. Of course, this being The Bachelor – a show in which maximum drama at all times is key – the show immediately capitalized on this opening and brought half of the women (including Liz) on a breakup-themed group date with Nick so it could all be hashed out.

While I was positive that the Liz-Nick drama would linger on for at least a few weeks based on how much "Liz's big secret" had been promoted by the show, Nick surprisingly eliminated her midway through the group date – an unexpected move, given that eliminations are almost exclusively rose ceremony territory. Nick reacted badly to Liz's soul-baring (and so real) break-up speech after ignoring her for the majority of the group excursion to the Museum of Broken Relationships. The encounter forced Nick to admit that he didn't see a future with Liz and had more of a connection with the other women. It was clearly incredibly awkward, and no one would blame Liz for steering clear of the show altogether.

While Liz herself hasn't directly commented on her experience on the reality dating show, her best friend Jade has been acting as an intermediary, unabashedly criticizing Nick for his harsh treatment of her friend and dismissing his excuses. She even pointed out that Nick himself had been the Liz of Kaitlyn Bristowe's season of The Bachelorette. Despite that, Jade was careful to clarify that, though she encouraged Liz to go on the show, she wasn't upset with Nick for eliminating her.

As for Liz, it's doubtful that she'd tune in to the show again after her uncomfortable and sudden departure. Clearly, she's been taking a lot of flak from viewers who (like Nick on-screen) questioned her motives for appearing on the show. Since the airing of her last episode, she's been active on social media and posted a subtle, indirect response to the backlash and her experience on Instagram.

"Unapologetically myself. #risk #love #livefree #runwild #speaklife#daringgreatly #untamed #aromancedlife," Liz captioned the photo. The comments on her post were a mix of supportive and antagonistic and the Las Vegas-based doula responded to several of them. In answer to one commenter who sent over her support for Liz and mentioned that she hadn't seen any of the show yet, Liz replied back that she hadn't watched the second episode either.

It's unclear whether Liz might continue to watch the show after the awkwardness of her departure and the aftermath subsides, but no one could possibly blame her if she chose not to.