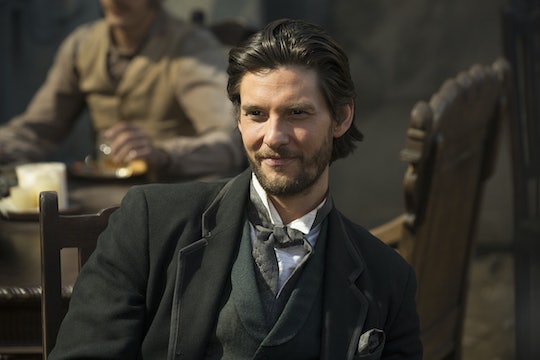 Is Logan Dead On 'Westworld'? William's Friend Has Gone Missing

There are so many storylines, or narratives if you will, on Westworld that it's not all that surprising that each episode doesn't show every character and plot every single time. Instead, it seems the show switches off plotlines week to week. One week the series will check in with Bernard, Elsie, Theresa, and Co. and then the next week, things shift more toward the Man in Black and/or Dolores still looking for the maze. However, for the past few episodes there's one character that seems to have completely disappeared. After William left Logan to fend for himself, fans haven't seen him since, leading many fans to wonder if possibly Logan is dead on Westworld.

The last viewers saw of Logan, he was getting beat up by some hosts and rather than try to save his shady friend, William and Dolores hopped on the first train out of town with Lawerence (aka El Lazo). Although in theory hosts can't actually kill guests, Bernard's recent murder of Theresa proves that's not totally true. Plus, if you believe in the two different timelines theory, then it's possible Logan's visit to the park came before they had that safety measure installed.

Still, it seems very unlikely that the people running the park would just allow a guest to be killed by hosts where any other guests could see it happen. I mean, that's not exactly great for business. Ford was only comfortable using Bernard to kill Theresa because there was no one else there who would know what had happened. Similarly, Theresa wanted to pull a bunch of hosts out of the park solely because she worried they would be harmful to the guests. There's no way those that watch the park from behind the scenes would just let Logan die... right?

But if Logan isn't dead then where exactly is he? There are numerous answers to this question. One is that Logan was actually a host that was used to bring William to the park for some unknown reason. Another explanation is that whatever company Logan and William work for wanted Logan to bring William to the park to either kill him or trick him in some way, and it was always Logan's plan to ditch William whenever he got the chance. Therefore William may have thought he was leaving Logan behind, but in reality that was Logan's plan all along.

Wherever Logan is and whatever he's up to, it'd be surprising if he didn't pop back up before the first season is over. His precarious friendship with William will definitely lead them to cross paths once again. But as for what will happen when they do, that's anyone's guess. But I think it's safe to say that it definitely won't be a very happy reunion.