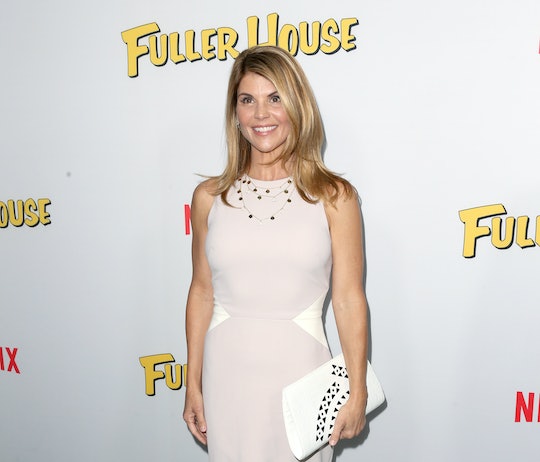 Earlier this week, Full House fans were surprised to learn that Lori Loughlin, also known as Aunt Becky, was accused of allegedly spending money in bribes to help her two daughters get into the University of Southern California, according to NBC News. And now people are wondering about the fate of Loughlin's TV roles, like her one on Netflix's Fuller House. So, it's only natural for people to wonder — is Lori Loughlin returning to Fuller House? The fate of Aunt Becky is entirely unclear.

People are used to seeing Loughlin on their TV screens through the beloved 1990's show, Full House, and the current Netflix series, Fuller House, which is still streaming on the website. But now people are wondering if they will ever have the chance to see her character, Rebecca Donaldson-Katsopolis, on their TV again.

A source told TMZ on Thursday that "there are currently no plans" for Loughlin to return to Season 5 of Fuller House, which is also currently not in production. Representatives for Netflix and Loughlin had no comment to Romper at this time.

In January, it was announced that Season 5 would be the last season of Fuller House, and is set to air in the fall of 2019, according to E! News. So, it's not clear if Loughlin will return to wrap up her storyline on the show come this fall.

But Loughlin and the older generation of the Tanner family isn't the focus of Fuller House, anyway. Loyal watchers of the Netflix show know that Fuller House focuses the oldest Tanner sibling, DJ, as she navigates being a single mom and raising her children with the help of her sister and best friend. Loughlin is just a reoccurring character on the show, popping in to update fans on her life.

Throughout the past four seasons, Loughlin and her on-screen husband, John Stamos, have appeared in random episodes, checking in with their nieces and grand-nephews, according to ScreenRant. In the first few seasons, the Katsopolis' live in Los Angeles with their twin sons, but later move back to San Francisco in Season 4.

Although she might not have been the show's star, Loughlin was a huge part of franchise.

Before Fuller House there was Full House, which ran on ABC from 1987 to 1995, according to Entertainment Weekly. Loughlin joined the cast in the second season as Danny Tanner's morning show co-host and Uncle Jesse's love interest. Throughout the show, which ran for eight seasons, people fell in love with entire blended Tanner family, and the actors themselves felt like they were part of a family, according to Entertainment Weekly.

Although there was a 20 year lull between the original series and the sequel, the original actors from the show jumped right back into their characters. And in February, Loughlin told The Hollywood Reporter that she loved the response that fans had to them filling their iconic roles again.

"I always knew we were this beloved show, and generations had grown up on the show, but I think when it really came back as Fuller House, and that initial response was so overwhelming and it was so big, that I think that's when it finally hit me," she said.

It hit Loughlin so hard, that she told The Hollywood Reporter that she was sad to hear that the series was coming to an end.

"I think there's still so many great stories to be told, and who knows, maybe if Netflix says no more, maybe someone else will pick it up," Loughlin said.

Fans of Fuller House will have to tune in when the final season airs later this year to see what will be of Aunt Becky's story.

More Like This
Kim Kardashian Stars In Hilarious House Of The Dragon Parody, The Targashians
Chrissy Teigen Says Her Pregnancy Cravings Are "Comical At This Point"
Kate Middleton Shares What The Royal Kids Were Curious About During Queen's Funeral
John Mulaney Teaches His Son To Say "Ahh" After Drinking Water In A Super Cute Video