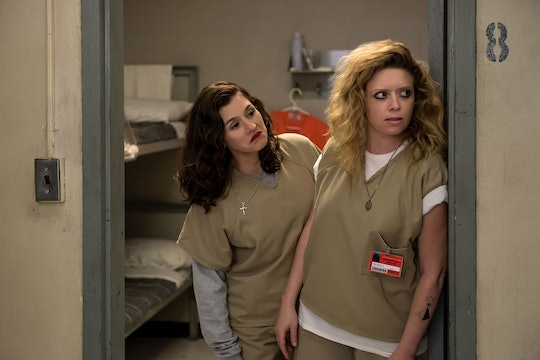 Warning: Season 5, Episode 12 spoilers ahead! Lorna Morello has always had some trouble distinguishing her fantasy life from the real world on Orange is the New Black. She ended up in jail for stalking a man she went on one date with because she became convinced that their relationship was much more significant than it really was. Her whirlwind romance and marriage to Vince Muccio seemed to affirm her fairytale fantasies for a little while, but when she announced that she was expecting a child, her past lies made it hard to believe her. So is Morello really pregnant on Orange is the New Black?

It definitely seems like she is going to have a kid, which is an interesting turn for her storyline to take. She announced it all over the prison before she knew for sure, which led more than a few of the other inmates to doubt her. Their disbelief eventually pushed Morello to get some definitive proof and, after taking every pregnancy test the medical supply room had to offer, it was clear that she is definitely pregnant. One test could be wrong, but not 12. And it's actually possible, because she did sleep with Vince after their wedding. But what does this mean for Morello going forward?

Viewers have seen a prison pregnancy play out before, so they know what to expect. Daya's pregnancy was a major plot in previous seasons, but Morello's pregnancy probably won't unfold in quite the same way. Daya had to cover up who her baby's father was, but Morello won't have to do that. Even though she and Vince weren't supposed to sleep together because conjugal visits weren't allowed at Litchfield, it would be easy enough to explain that they did it anyway.

Morello's child will be born while she's still serving her time, so she won't get to care for her baby in its infancy — something that greatly upset her to think about in Episode 12, "Tattoo You." But she has a support system outside of the prison that Daya didn't have. Even though Vince freaked out when he first found out about her pregnancy, either he or his family could take responsibility for the baby. Morello has her own family on the outside, too, with parents and siblings who might step up to care for her child until she's able to do so herself.

But there will also be Morello's mental health concerns to take into account. Having a baby in prison is never a simple situation, even if Morello is able to count on someone to look after her baby when he or she is born. Odds are this storyline is going to get a lot more complicated before it can find a resolution, and that resolution might not be satisfying to everyone involved.