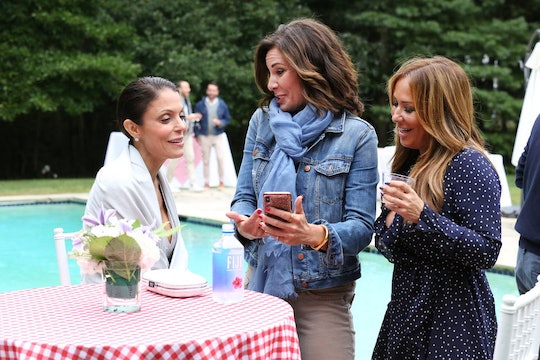 After Luann de Lesseps' 2018 arrest in Palm Beach, she chose to take a plea deal: according to People, she pled guilty to charges of battery, trespassing, and disorderly intoxication so that she could avoid going to jail. Instead, she was put on probation and had to perform community service, as well as attend AA meetings and classes. But is Luann de Lesseps still on parole?

In August 2018, People reported that Luann was "placed on a one-year probation." If that's the case, then she would be on probation until summer 2019, so she still has a few months to go before she's left the situation entirely behind her. She was required to go to two AA meetings a week, as well as a Victim Impact Class run by MADD (Mothers Against Drunk Driving). Per the MADD website, a Victim Impact Panel in an "awareness program for offenders convicted of driving under the influence of alcohol or other drugs." The presentation consists of victims of impaired drivers telling their stories.

As a condition of the plea deal, Luann also couldn't drink or take drugs and she had to write an apology letter to the officer who arrested her, Deputy Steven O'Leary.

Luann's return to rehab occurred a month before her plea deal was struck, so it doesn't seem as though that complicated the situation any further. She had gone to rehab shortly after her arrest in December 2018, but went back in July. During a September appearance on Watch What Happens Live with Andy Cohen, Luann disputed co-star Dorinda Medley's assertion that she had been ordered by the court to attend rehab again.

"I went on my own recognizance, so Dorinda doesn't know anything about me," Luann said, according to Page Six. "I went because I felt that I needed to go and take care of myself. I take it very seriously, my sobriety, and it's 51 days [sober] today." She had relapsed after a very public issue with her ex-husband Alexandre de Lesseps and their children Victoria and Noel. They sued Luann for breaching a stipulation of her divorce settlement and failing to set up a trust for the kids like she was supposed to.

While on Megyn Kelly Today, Luann said that after that news broke, she was devastated and betrayed. She ended up drinking, which was what prompted the second stint in rehab. But her plea deal came after that, so it wasn't a violation of her parole. However, in February of this year, Page Six reported that Luann allegedly hasn't been meeting all of her parole requirements. The publication stated that court documents had been acquired by The Post that revealed Luann had only completed half her community service hours, skipped a sobriety class, and did not have proof of attending AA meetings.

Luann's community service will figure into The Real Housewives of New York Season 11, and a clip from an upcoming episode shows her discussing a meeting with her parole officer. It sounds like Luann is still dealing with the fallout from her arrest, and will be for some time to come.