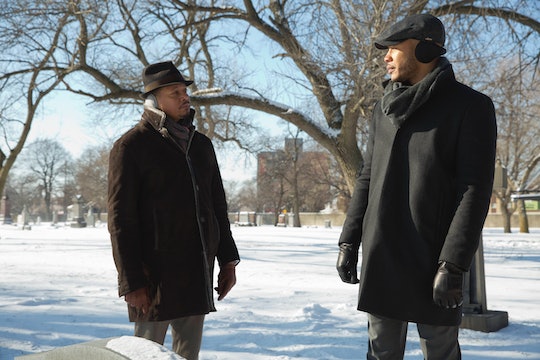 Is Lucious' Mom Alive On 'Empire'? Leah Walker Seems To Be Breathing

Lucious Lyon works in mysterious ways. He always seems to have a plan up his sleeve, but the newest development on Empire might be his most twisted plot yet. After the past few episodes revealed just what happened to Lucious Lyon's mom on Empire, Wednesday's episode that Lucious' mom, Leah Walker, might still be alive. Yes, the woman that supposedly killed herself in front of her young son might still be sitting in a rocking chair in Pennsylvania.

In a previous Empire episode, fans learned the very tragic way that Lucious lost his mom. It was no secret that his mother, Leah, was bipolar. Previous flashbacks showed her lack of medical attention to a very sad struggle, eventually leading to her death. We knew that Leah tried to drown Lucious when he was young, but eventually shot herself, killing herself right in front of Lucious. (This all played out when it was recreated for Lucious' video.)

On Wednesday's episode, Thirsty Rawlings traveled to New Hope, Pa. to a facility where a Leah Walker resided. He didn't meet with her — in fact, he urged the attendant to not let her know that he was there — but there was indeed a woman singing "Mona Lisa" rocking in a rocking chair (as one does). So, is that Lucious' mom?

I don't know who else it could be, even if we saw Lucious and Andre visit Lucious' mom's grave earlier in the episode. Is it possible that Lucious doesn't even know that his mom is alive? My guess is that he does know, he just doesn't want to deal with it — much like how never discussed his mom's mental illness and how it related to Andre's own struggle with being bipolar.

This Leah Walker doesn't seem like she can do much damage to Lucious' legacy, so it will be interesting to learn why she is being kept far away from her son and his family. It appears that Thirsty is just the middleman who drops off the means for her to stay there, and I am assuming Lucious is the one behind that money.