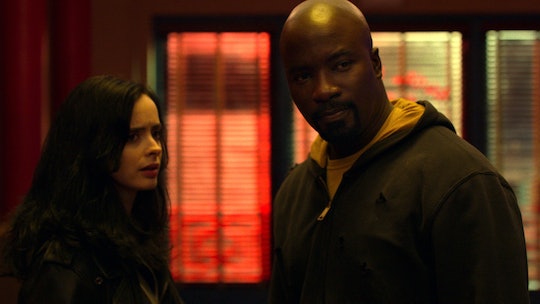 Jessica Jones is finally back for an all-new season and it looks to be just as badass as the first. In Season 1, fans got to know Jessica as she faced off against her abuser Kilgrave and struck up a romance with Luke Cage. It's already been revealed that Kilgrave will make a reappearance somehow, but is Luke Cage in Jessica Jones Season 2? Unfortunately, it seems unlikely, at least from what I can tell.

The last time Jessica and Luke saw each other was at a bar at the end of The Defenders. Luke went to check on Jessica after — spoiler alert! — Matt Murdock "died." It was during this conversation that Luke and Jessica finally reconciled the way their relationship ended and forgave each other for all that happened between them. Luke also said he was glad that it wasn't Jessica who died when the Defenders took down the Hand.

However, it was the end of their conversation that really had people speculating about the future of Luke and Jessica's relationship. After Luke reminded Jessica she had a friend in Harlem, she suggested that they get coffee. In case you didn't watch it, during the first season of Luke Cage, a running joke was that coffee was a euphemism for sex. One has to wonder if Jessica knew about the double entendre of her word choice, or if she was totally unaware of it. Either way, the writers certainly seemed to be hinting at something, but that doesn't mean anything will happen during Jessica Jones Season 2.

Besides the fact that Luke himself is currently in a relationship with Claire, rumor has it Jessica will be getting a new love interest this season. Many months ago when Season 2 was being filmed, set photos leaked showing Jessica locking lips with someone. The mystery man was never named, but predictions began to swirl that a new love interest was in store for Jessica, and that was pretty much confirmed when trailers for the new season were released. In them Jessica can be seen getting hot and heavy with someone that is certainly not Luke. That being said, Jessica's never really been the relationship type, so it's hard to say if this new love interest will last or if he's just another hook up.

Either way, it's clear Luke won't be playing a starring role in Season 2 of Jessica Jones, but does that really mean he won't appear at all? I wouldn't count him out entirely. Luke could totally make a cameo without it having to be something romantic between him and Jess. While Jess can certainly handle her business on her own, she may need a little back up with whatever she comes up against from digging into her own past. Perhaps she'll take Luke up on his offer of friendship and give him a call at some point this season. One can hope.

If Luke doesn't show up though, fans won't have to wait too long to see him again. Although Season 2 of Luke Cage hasn't been given an official release date yet, Netflix did confirm that the new season would be out sometime this year. Since the season has already wrapped up filming, fans can probably expect its release sometime this summer or early fall. Either way, it's not too long of a wait.

For now Marvel fans can enjoy Jessica Jones and keep their eyes peeled for Luke. And after that little Punisher teaser that was put at the end of The Defenders, you may want to stick around just in case there's any after-credit scenes as well.