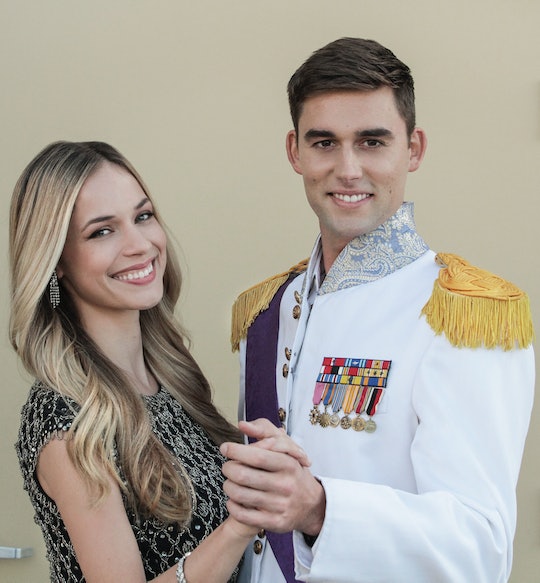 You'll Fall In Love With Lifetime's 'My Christmas Prince'

'Tis the season for a Christmas love story. As always, this holiday season brings a whole new crop of Christmas movies to make you swoon and get you into the holiday spirit. One of those movies is the Lifetime original My Christmas Prince, which tells the story of Samantha, who brings her boyfriend, Alex, home for the holidays, only to learn that he's actually the Prince of Madelvia. If you've never heard of Madelvia, you may be wondering if Madelvia from My Christmas Prince is a real country.

Like many other royal love story films, Madelvia was a country made up specifically for the movie. Madelvia is described as a tiny European country, and based on the trailer, Samantha and Alex will at some point make their way there. At first, Samantha was under the impression that Alex was only a diplomat from the fictional country, which is why she was understandably shocked to learn the truth.

Over the course of the movie, Samantha will be faced with the challenge of trying to decide if she should stay with Alex and be a part of his very public life or accept the job opportunity of a lifetime and continue being a teacher. Unfortunately, this means Samantha will have to choose between love and her career, which is a very hard decision for anyone to make, whether there's a prince involved or not. In order to find out what Samantha decides to do, you'll have to watch the movie, which airs Sunday, Dec. 3 on Lifetime at 8 p.m. EST.

The TV movie stars Alexis Knapp as Samantha. You may recognize Knapp as Stacie from the Pitch Perfect movies. Her princely co-star is Callum Alexander, who seems relatively new on the scene, and this may be his very first TV role, since he doesn't seem to have any other acting credits to his name. The movie also stars Marina Sirtis, Charles Shaughnessy, Jane Carr, Parker Stevenson, and Pamel Sue Martin.

Lifetime isn't the only place you'll find a Christmas prince this winter, though. Netflix recently released their own original holiday film called, A Christmas Prince. Yes, the titles are strikingly similar, but the premise of the movies are a bit different. In A Christmas Prince, the main character, Amber, is well aware her love interest, Richard, is a prince. In fact, when she meets him she's actually undercover, working as tutor for his younger sister. In reality, she's a reporter who was sent to the palace to spy on the prince who's rumored to be a playboy.

Of course, while Amber attempts to find a scoop, she ends up falling in love with the prince. This movie stars iZombie star Rose McIver as Amber and The White Queen star Ben Lamb plays Prince Richard. A Christmas Prince is now streaming, so you can watch it on Netflix and see how it compares to My Christmas Prince. Or you can just watch and enjoy both, without making a comparison, as they both look like cute, romantic films that will make you wish you could fall in love and marry a prince.

Either way, you'll have a lot of options to choose from this holiday season if you're looking for a Christmas romance story. From the classics like Love, Actually and The Holiday or new TV movies like My Christmas Prince, you could probably spend the whole month of December just enjoying Christmas movies. Honestly, that sounds like the best way to spend the holiday season to me.