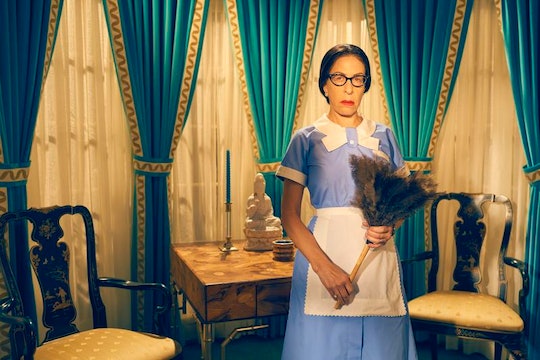 Mamacita From 'Feud' Has An Interesting Backstory

One of Feud's most unexpected breakout characters is not necessarily one of its A-list actors, but rather, Second City alum Jackie Hoffman's turn as Mamacita, Joan Crawford's maid-slash-agent-slash-personal assistant-slash-caretaker. Ryan Murphy even revealed that countless fans have come up to him divulging that they plan to dress up as Mamacita for Halloween. (It's never too early for Feud costume guides, apparently.) Part of her appeal comes from her resting no-nonsense demeanor, which, when dealing with an unhinged Crawford, often lends itself to accidentally hilarious deadpan humor. But is Mamacita from Feud based on a real person? Unbelievably, yes, and also, there's a story behind why Crawford called her German immigrant maid by a Portugese nickname.

Mamacita's real name is Anna Marie Brinke, and she really did work as a maid for Crawford from 1960 to 1974. Crawford first hired her to clean the Hamptons summer home she was vacationing in for two months with her then-13-year-old twin daughters. At the time, Brinke had nine adult children and many grandchildren. But Crawford liked her so much, she wound up taking Brinke back to Los Angeles with her. As for her nickname, Mamacita earned the moniker because, when they met, Crawford had just come back from a trip to Rio.

Wrote Crawford in her 1971 lifestyle book My Way of Life of Brinke's first day on the job:

I wanted to call her to come quickly to take the dogs out but I realized that I hadn’t asked her name. I had just returned from Rio de Janeiro, where all I had heard was mamacita, papacita, cousincita, everythingcita, so without thinking I called out, 'Mamacita!'

Back she cried, 'Ya! Ich coming!' The name has stuck ever since. In all the countries we have traveled to together, in all languages, everyone calls her Mamacita.

It's also true that Brinke came into Crawford's life when she was basically tapped out on cash, so she really was often the only person working on the sprawling Los Angeles estate. According to Joan Crawford: The Essential Biography, Brinke finally went back to Germany in 1974 to handle a family crisis, but her son is the one who suggested her departure as it's depicted in the latest Feud promo. He told the moderator of a Crawford fan site that Brinke quit because she was "tired of things being thrown at her."

As for the rest of Brinke's involvement according to Feud — finding the source material for Baby Jane and fielding Pauline's script pitch — there's no evidence that she actually had anything to do with the film. Murphy also admitted that he loved Hoffman's work so much that he stuck Mamacita in scenes she wasn't scripted in just to give her more to do. Can't say I blame him.