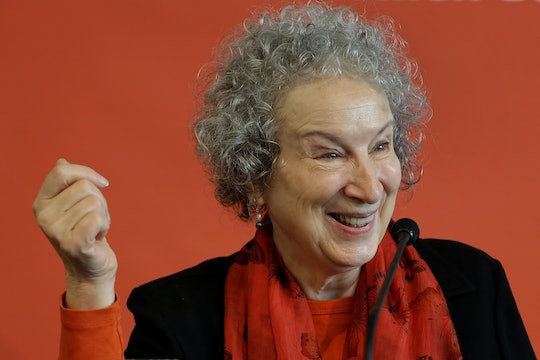 Is Margaret Atwood At The Golden Globes? Elisabeth Moss Gave Her A Big Shout-Out

Mainstay of college feminist lit courses for the last 30 years, Margaret Atwood is now enjoying something of a TV renaissance. Hulu picked up a 10-episode miniseries adaptation of her 1985 dystopian novel The Handmaid's Tale, and Netflix later released a six-episode adaptation of her 1996 book Alias Grace. The former was showered with Emmys last year and Atwood attended the awards show as star Elisabeth Moss' date. So is Margaret Atwood at the Golden Globes, too? Moss did pick up the award for Best Actress in a Drama TV Series for her work on The Handmaid's Tale, but Atwood was conspicuously absent.

Although Atwood did originally plan to attend the Golden Globes, she sent out a letter to the media the Friday before the telecast to let them know that she wouldn't be able to make it due to health concerns. The author has been on a whirlwind media tour for the past several months promoting both series, in addition to joining The Handmaid's Tale team on the awards circuit. The 78-year-old writer also cited how grueling the schedule was for a woman of her age, so she's taking a much deserved break and sitting out the Golden Globes at the behest of her family.

Atwood's letter to the press read in full:

I very much appreciate your interest and ongoing support of The Handmaid’s Tale. Alas, for family and health reasons I cannot attend the Golden Globe Awards and the ICM party this time. I had to cancel, as my family was protesting and I could not manage to drag myself onto a plane, depleted as I am after this autumn's non-stop activities. I apologize for any inconvenience this causes, but I hope you understand that this is getting somewhat too strenuous for a person of my increasingly advanced age.

You all are in good hands with Bruce Miller and many of our amazing cast who will be attending the party. I will be thinking about you all on Saturday night and watching and cheering our team on as the Golden Globes roll forth on Sunday in all their splendor!

Come visit us on the set. When you’re there, perhaps we can sit down together!

Have a wonderful time!

With all best wishes,

The Handmaid's Tale went on to win the Golden Globe for Best TV Series — Drama later in the night. When the series won its Emmy, Atwood actually stepped in to speak during the acceptance. But Moss made sure Atwood was represented in her Golden Globes speech, too, even though she couldn't physically be present.

Moss shared an excerpt from The Handmaid's Tale after completing her thank yous, reading, "We were the people who were not in the papers. We lived in the blank white spaces at the edges of print. It gave us more freedom. We lived in the gaps between the stories."

She then added, after dedicating the award to Atwood, "We are the story in print and we're writing the story ourselves. Thank you."

Even though the show's first season covered the events of the book in full, Hulu opted to pick it up for a second season, imagining a continuation of Offred's story. Thankfully, Atwood will be even more involved with upcoming seasons to make sure the series doesn't go off the rails.

“I think it will be more involving in the second season because we will be in uncharted territories so more invention will have to take place,” she told Entertainment Weekly.

Season 2 of The Handmaid's Tale is set to premiere April 2018.