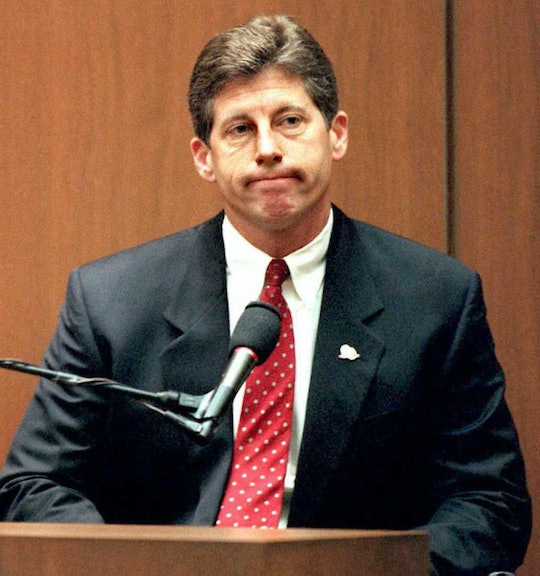 Is Mark Fuhrman Still a Cop? The Detective From O.J. Simpson's Trial Has Moved On

The popular FX series The People v. O.J. Simpson has brought about newfound curiosity regarding the so-called "Trial of the Century," in which Simpson was acquitted of the 1994 murders of his ex-wife, Nicole Brown Simpson, and her friend, Ronald Goldman. Viewers who were too young to recall the trial are fascinated by the case, and even those who watched the drama unfold in real time are learning about the case from a whole new perspective. It makes one wonder, "where are they now?" Everyone knows where O.J. is, but what about the detective in the center of the case? Is Mark Fuhrman still a cop?

He's not. In fact, Fuhrman retired from the Los Angeles Police Department during the Simpson trial, in August 1995. As viewers are now seeing in the FX series, Simpson's legal defense hinged on the theory that one of the most damning pieces of evidence in the case, the bloody glove found by Fuhrman, was actually planted. The defense claimed that a culture of racism within the LAPD led to a conspiracy to frame Simpson. They also painted Fuhrman in particular as racist, and as evidence, presented audio recordings of Fuhrman bragging about planting evidence, brutalizing and framing minority suspects, and using the n-word more than 40 times during conversations with screenwriter Laura McKinny. Fuhrman's current representative told Romper that Fuhrman does not wish to provide comment.

Fuhrman, for his part, claimed that the tapes were taken out of context at the time, and that the words Judge Lance Ito heard were that of a fictional "gritty street-cop" character he was helping McKinny create. It's also worth noting that an investigation into his career by the Los Angeles public defender's office found virtually no complaints against him, and no known instances of him ever planting evidence. In fact, deputy public defender Michael Clark said that "there were some compliments paid to Fuhrman by arrestees," including minorities he'd arrested. Still, the damage had been done, and he was forever tainted in the eyes of not only the Simpson jury, but also the rest of the country.

Furhman was indicted on perjury charges after the trial, stemming from his statement during the trial that he hadn't used a racial epithet in the past decade. He pleaded no contest and received a $200 fine and three years probation. Pleading to a felony means that Fuhrman is no longer eligible to be a police officer, even if he wanted to be.

But it seems that he's uninterested, anyway. In the years since his retirement from the police force, Fuhrman has enjoyed a career as a New York Times bestselling author and a consultant for Fox News. He's even still doing detective work, in a roundabout way; some credit his 1998 book Murder in Greenwich with solving the 1975 murder of Martha Moxley. In the book, Fuhrman presented his case against Kennedy cousin Michael Skakel. The book renewed the public's interest in the case, which was then reopened. Skakel was eventually tried and convicted in 2002. Perhaps, even without a badge, Fuhrman is still, in some ways, a detective.