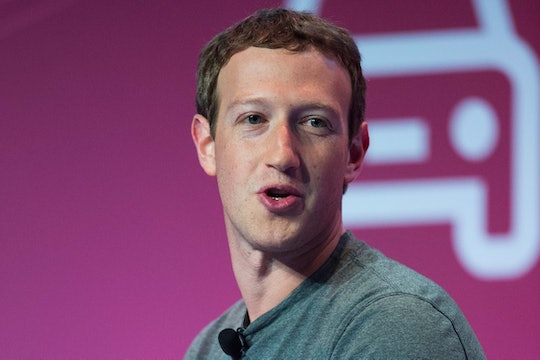 Former reality TV star and real estate heir Donald Trump's unlikely, jarring ascension to the presidency wasn't just unexpected: It forced the nation to confront how vast wealth and social influence can aid in catapulting someone into the nation's highest office. Suddenly, the idea of a Kanye West 2020 bid doesn't seem quite so crazy. And with Facebook's CEO flirting with the political in the wake of the debacle that was Election 2016, speculation that perhaps Mark Zuckerberg is planning on running for president came across as relatively benign. But, really, it's simply too soon to know for sure whether the 32-year-old, self-made billionaire will be liberals' answer to the rise of white nationalism, isolationism, and general incompetence currently permeating the federal government.

For his part, Zuckerberg himself is denying that he has any intention of pursuing America's top job, BuzzFeed News reported in January. But the outlet reported that he "did not immediately respond to follow-up questions about whether he’d explicitly ruled out a run," during what was apparently an email interview. So, Zuckerberg 2024? 2028? But why are rumors even swirling that the man at the helm of the world's most influential media company has any interest in the presidency in the first place?

Simply put, he's been acting a lot like a politician for a man who claims to be acting without political ambition. There's the candidate-esque New Year's pledge swing by the 30 states he'd never visited to "talk to more people about how they're living, working and thinking about the future," as he outlined in a Facebook post. A former White House photographer is documenting the journey, which saw him enjoying BBQ and attending a Mardi Gras parade in Louisiana Thursday — and there's even a Facebook page dedicated to showcasing highlights from his "Year of Travel." In late December, he denounced his long-held atheism. And perhaps, most tellingly, he recently convinced his board of directors to grant him a leave of absence if he were to run for a government office, meaning that he would be able to retain control of the social media giant.

Facebook as an entity strives for political neutrality, but Zuckerberg himself has been critical of Trump in the past, airing his disapproval of the Republican's plan to build a wall along the U.S.-Mexico border and condemning his January executive order to halt the nation's refugee program. So, progressives can dream, right? And to get themselves through the next four years, they have been.

Even if he is privately contemplating a presidential run some day, despite what he told BuzzFeed, Zuckerberg must now confront the role Facebook itself played in the rise of Trump. As Vanity Fair's Maya Kosoff wrote, algorithms that determine users' preferences on the site "created an ideological echo chamber, preventing people from being exposed to news stories that contradicted their worldview and segregating friend networks based on their politics." It also lent a platform to scammers spreading a scourge of "fake news" that many believe swayed votes — a problem Zuckerberg has vowed to fix.

Maybe these problems are inevitable for a site of Facebook's size and influence: It boasts 1.86 billion monthly users. And Zuckerberg's commitment to remedying the issues can only grant him more confidence from the voters he'd hope to capture in some upcoming election. For now, he seems to be weighing his options and keeping them open.

More Like This
The President Of Ireland Wants To Get Rid Of Homework & Honestly, He's Onto Something
Harrison Ford Is A Proud Dad Of 5 Kids Who Are More Than 30 Years Apart
Adele’s Grammy-Nominated Album Features A Beautiful Song Written For Her Son Angelo
Brandi Carlile Is “Finally Cool” To Her Two Adorable Daughters
What Parents Are Talking About — Delivered Straight To Your Inbox