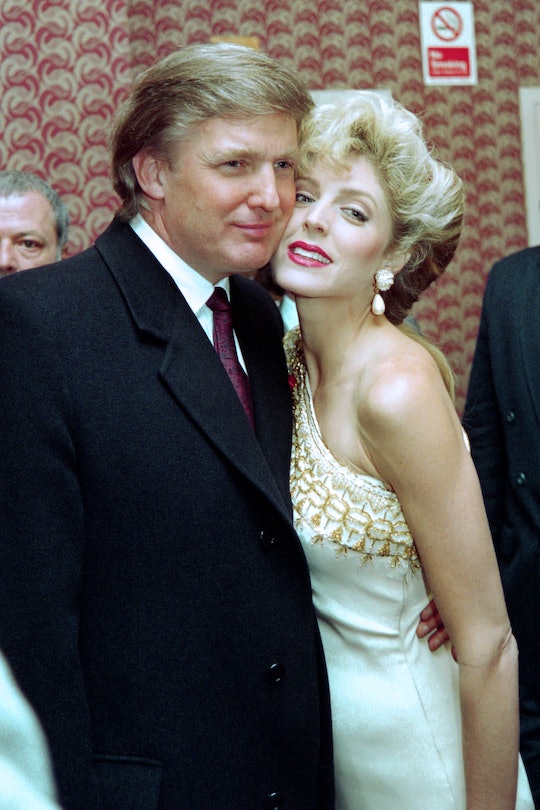 While Donald Trump will be sworn in as president with his current wife Melania at his side, many were wondering if his former wives (with whom he has children) will be at the inauguration. While many outlets reported earlier that they were invited, it was unclear if they would attend and in what capacity. Is Marla Maples watching the inauguration? Trump's ex-wife, and the mother of his daughter Tiffany, was spotted in Washington D.C. and was expected to attend the ceremony.

Maples was Trump's second wife, who he married after divorcing his first wife Ivanka, the mother of his daughter Ivana and son Eric. All of his children, including his youngest son Barron with his current wife and the now-first lady, Melania, were present at Trump's inauguration.

His daughter with Maples, Tiffany, stood with her half-siblings alongside her father throughout the events of inauguration day, but her mother was not among the president-elect's entourage. That didn't mean she wasn't given an invite, though.

Maples and Tiffany were both seen out and about in Washington D.C. in the days leading up to the inauguration. In fact, the two made headlines earlier in the week after supposedly trying to get free hairstyling for the ceremony in exchange for "exposure" for the stylist who claimed she'd been contacted by Maples' assistant, according to The Washington Post. The D.C. stylist also told The Post that Maples and Tiffany were expected to split a $300 budget for hair, makeup, and wardrobe for the inauguration ceremony.

While Tiffany reportedly was flown to D.C. on a private jet, PEOPLE reported that Maples supposedly had to pay her own travel expenses to get to the capitol for the ceremony.

After her divorce from Trump, Maples raised their daughter Tiffany mostly on her own. Tiffany told Oprah that she and her mother are very close, in part because she raised her as a single mother: “Growing up, we were always together and I know my friends — everyone at home — is like, "Wow, you guys have a really good relationship.’”

In addition to raising Tiffany, Maples has also appeared in film and television, most recently as a contestant on Dancing With The Stars last year. Maples has also done a great deal of philanthropic work for the Global Lyme Alliance, as she suffered from Lyme Disease as a teenager. Maples hails from a small town in Georgia and made her way to New York City as a young woman with hopes of becoming an actress. Last year she told The Daily Beast that while her original ambitions may not have panned out as she had hoped, her relationship to Trump certainly elevated her to a certain level, one that she's tried to use for good.