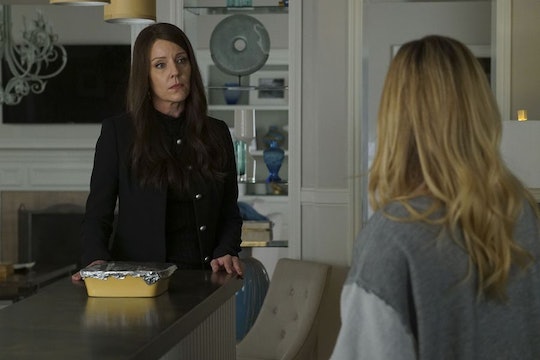 Is Mary Drake Bad On 'Pretty Little Liars'? She May Not Be The Villain We Think She Is

When it comes to Pretty Little Liars, it's always best to expect the unexpected. Although at the end of last season it seemed clear that Mary Drake, the long lost twin of Ali's mother, was the villain, alongside Ali's husband, Dr. Rollins, but it seems there may be more to that story. We now know Dr. Rollins was definitely evil and his real name is actually Archer Dunhill, but is Mary Drake really trying to hurt Ali as Dr. Rollins was? Or is Mary Drake actually trying to help Ali somehow?

Although Mary Drake and Archer were definitely working together, when Archer started mistreating Ali because he believed she killed Charlotte, Mary Drake tried to step in. After going to the psychiatric hospital with Emily, Mary gets into a nasty fight with Archer about how he's treating Ali and how he's going to far. Archer then shut Mary out completely, not letting Ali have any visitors, including family.

If Mary Drake was really after Ali, why did she try to protect Ali from Archer. Why would Mary Drake care if her end goal is to hurt Ali? It doesn't make sense. However, one fan theory may provide an explanation. What if Mary Drake is actually Jessica DiLaurentis and she's trying to protect Ali because that's her daughter?

Based on the twin storyline found in the books, some fans believe that at some point Mary and Jessica switched places and it was Jessica that was in Radley that whole time. Jessica then got out of Radley, killed Mary, who everyone thought was Jessica, and is now back as Mary. Yeah, it's a bit hard to follow, but the idea is that Mary Drake is actually Jessica DiLaurentis, and if that's the case it makes perfect sense why she'd be looking out for own daughter.

Although this theory makes sense, it doesn't explain why Mary was working with Archer in the first place. Did she plan on betraying him at some point? Unfortunately it'll probably be more difficult to get answers now that Archer is dead. Whatever her reasons are — if Mary really does want to hurt Ali — she'll have the opportunity to do so now that Ali will be placed in her care. Hopefully Mary isn't the true villain we think she is and Ali will be safe. Honestly, hasn't Ali been through enough?