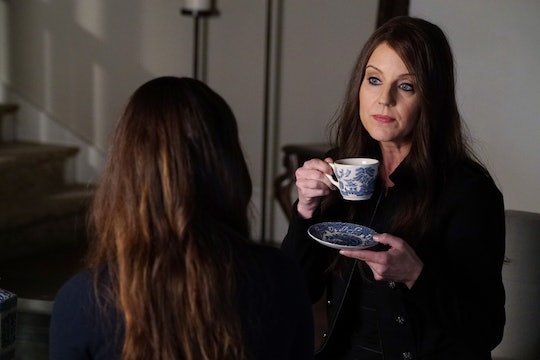 Is Mary Drake 'Uber A' On 'Pretty Little Liars'? She May Be Working For Someone

In typical Pretty Little Liars fashion, the Season 6 finale left fans with more questions than answers. It was revealed that Alison's mother, Jessica DiLaurentis, actually had a twin sister, Mary Drake. Mary was committed into Radley, as almost everyone in Rosewood has been at some point, where she gave birth to Charles Drake who Jessica and her husband, Kenneth, adopted. Charles became Charlotte, who's best known as CeCe Drake, and was found dead at the start of the second half of Season 6. Mary Drake has resurfaced, leading some fans wondering if Mary Drake is Uber A on Pretty Little Liars.

It turns out that Mary was working with Elliot, Ali's fiancé turned husband, and they were working together to make Ali think she was crazy. Mary pretended to be the dead Mrs. DiLaurentis and Elliot wore a mask that made him look like Detective Wilden. They were able to convince Ali she could no longer differentiate what's real and not real, and Ali voluntarily checked herself into Welby State Psychiatric Hospital, which was all part of Mary Drake's big plan.

As revenge for CeCe's death, even though as far as we know it wasn't Ali that killed her, Mary and Elliot now control Alison's 51 percent share of the Carissimi Group and all her money. Apparently Elliot was in love with CeCe and was playing Ali the whole time! Seriously, though everyone kind suspected something was off with him. He was sketchy from the start.

But just because Mary Drake and Elliot are obviously evil does this really mean Mary Drake is really Uber A, or A.D.? This seems unlikely. Pretty Little Liars is known for giving fans a false suspect before revealing who the real mastermind is. Plus, Mary Drake seems most focused on taking down Alison and getting what she believes to be hers whereas Uber A is targeting all the girls and trying to discover who killed CeCe.

Besides if Mary Drake was really A.D., why not show that she's the one that has Hanna? It doesn't add up. It's much more likely that Mary is either working with or for A.D. or there's just two separate villains whose goals kind of overlap. Either way the girls will be going up against a lot in Season 7. Hopefully everyone makes it out unscathed.