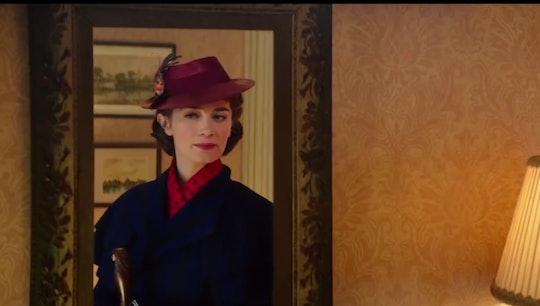 Is 'Mary Poppins Returns' OK For Kids Under 10? It's Pretty Family-Friendly

Nothing gets you ready to hunker down over the holidays like the release of highly-anticipated movies. This year is no different as Mary Poppins Returns hits the big screen. Cherry Tree Lane's favorite nanny is back, along with a few new friends and of course, those animated penguins. Disney fans are gearing up to head to theaters in droves, but some might be wondering if it's a flick the whole family can see. Is Mary Poppins Returns appropriate for kids under 10? The more the merrier, according to critics.

Mary Poppins Returns tells the story of a now-adult Michael Banks and his three children as they struggle to save their house from foreclosure. And just when they thought all was lost, their childhood nanny Mary Poppins returns to bring a little magic and adventure, according to Rotten Tomatoes.

The movie is rated PG, meaning parental guidance is suggested, as some material may be not be suitable for some younger children, according to the Motion Picture Association of America.

Other PG-rated Disney movies include Lilo & Stitch, Tangled, Coco, The Incredibles, Moana, and Frozen, according to IMDb. So, Mary Poppins Returns is in good company.

The non-profit group, Common Sense Media, awarded Mary Poppins Returns its official approval, deeming it acceptable for kids ages 6 and over. The group strives to help parents make smart media and technology choices, according to its site.

There are a few moments that could be interpreted as suspenseful or scary, but judging by the things most kids watch today, the odds that they'll truly be scared or upset are pretty slim. For one thing, Michael's wife has sadly died and the kids sing a song about missing her (sob). Secondly, one of the children gets captured by animated animals during the fantasy portion of the film. So far, so good. There is also one scene where Jack climbs to the top of Big Ben and briefly dangles before he is rescued. And the neighbor with the cannon is back, too, so if your little one doesn't do well with loud noises, that's something that's good to know too.

Common Sense Media also mentions the use of questionable language like pea brain, fool, and buffoon, and some British slang like bloody and blasted. Let's face it though, your kid may have heard worse the last time you got cut off in midday traffic.

Overall, some critics say that the movie is colorful, funny, and heart-warming, with lots of nods to the 1964 original, as noted by reviews on Rotten Tomatoes. Plus, the instances of suspense are few and far between and everything ends on a happy note.

The movie received high marks for positive role models and representations, as well as educational value, according to Common Sense Media. You can thank Emily Blunt's cheeky portrayal of Mary Poppins and Lin-Manuel Miranda's lovable lamplighter character, Jack, for that one.

While the movie definitely seems to be OK for kids ages 10 and under, parents should be their own judge as to whether their kids can handle the content. The film runs two hours and 10 minutes, according to IMDb, so that's also something to consider. Can your child stay seated and engrossed for that long of a period or will they get antsy before the final credits roll?

In short, if you just can't wait to see this movie, go ahead and watch with the entire family. Enjoy your popcorn, candy, and the return of beloved character Mary Poppins. Judging by some of the positive reviews, it seems sure to be an instant classic.