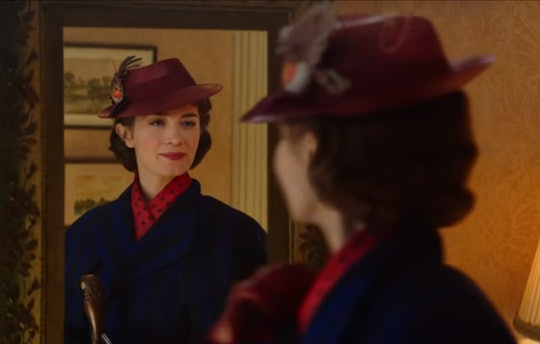 Is 'Mary Poppins Returns' OK For Kids Under 5? Here's What Parents Should Know

The magic that is Mary Poppins has finally come back to the big screen and I, for one, can’t wait to see it. I’m sure many of you feel the same way as you have the same fond memories of Julie Andrews and Dick Van Dyke’s 1964 original that told us all it was not only alright, but important to believe in a little magic in life. With this being the kind of movie you’ll probably want to take the whole family to see, you may be wondering if Mary Poppins Returns is appropriate for kids under 5 years old.

From looking at the trailer, it’s pretty hard to believe that any content in this movie isn’t fit for small kids. The question is, will they actually enjoy it? It is a movie that features children in lead roles, but the story is really about the grown-up Banks children and what they learn from the children and Mary Poppins. In that way, it’s a lot like the original.

So while there doesn’t seem to be any objectionable content, it’s hard to believe that a very young child will be able to follow the story for the entire run time.

That being said, one of many favorite moments from the original movie was an animated sequence featuring a carousel, horse race and singing farm animals. The new movie featured another such scene, which it sure to grab young eyes and hearts with its creativity and bright color palette.

It can be seen throughout this featurette below:

The story of Mary Poppins Returns picks up 25 years after the events of the original, according to Oh My Disney, when the Banks children have grown up and suffered a recent tragedy. While Jane Banks, played by Emily Mortimer, tries to assist her brother Michael, played by Ben Wishaw, with getting his life on track, they’re both floundering a bit. Mary Poppins shows up to step in again and remind them that they need magic in their world the same as they did when they were young, according to The Muse.

Emily Blunt stars as Mary Poppins alongside Lin-Manuel Miranda as Jack. You may not remember this, but Jack was actually an apprentice to Van Dyke's Bert in the original movie, according to Oh My Disney, which is a nice throwback detail.

The movie is rated PG for some mild thematic elements and brief action, according to the film’s IMDb page, which means parental guidance is recommended. According to Common Sense Media, there may be some scenes with anxiety, but nothing that is expected to cause any major concern for young viewers.

All in all, it sounds like a movie that will be a fantastic experience for the whole family and one that you could take kids under 5 to without having any major issues with the content. Though they may not follow every moment of the story, it will surely be the kind of exposure many of us had to its predecessor, which we ended up watching again and again anyway at all different ages, right?