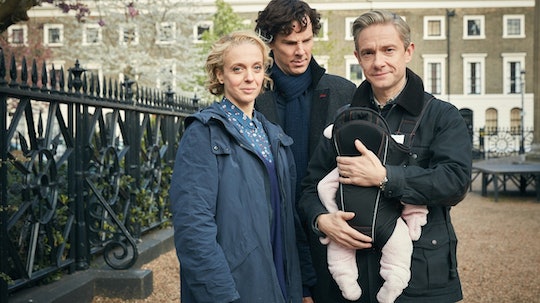 'Sherlock' Season 4 Started Out On A Grim Note

At this point, Sherlock fans know to expect the unexpected. However, the Season 4 premiere delivered the death of a main character in the most heartbreaking way that no one could've prepared for — even those who were familiar with the books and knew it was coming. I'm referring, of course, to Mary's Watson's demise, after she jumped in front of a bullet to save Sherlock's life. But is Mary really dead on Sherlock? After all, this show has pulled this kind of fake out before. Who could forget how Sherlock was magically able to survive that fall at the end of Season 2. So surely Mary could possibly return from the grave too, right? Right?!?! Sadly, it doesn't look like that will be the case.

While yes, the series has saved central characters from the grim reaper before, Mary's death seemed pretty definitive, which was made evident not only by John Watson's grief (which was heartbreaking in and of itself, by the way), but also because of how hard it seemed to hit Sherlock as well — a man who isn't exactly known for being the most sensitive human being ever. And if he seems convinced that Mary is dead, then I'm prone to believe that she really is. I mean, there's no faking out Sherlock Holmes.

It figures that things would go down like this though. Just as Sherlock had managed to crack the case and track down the person who was truly responsible for old ghosts popping back up into Mary's life. It looked as though she would finally be free and clear to live the regular life she oh so wanted to lead as a wife and a mother. But, of course, this happily ever after was not meant to be.

After using his deductive skills perhaps a little too well on the culprit, the woman wanted to do something that would surprise Sherlock to his very core, so she aimed her gun at him and pulled the trigger. But before our beloved detective could find himself shot once again, Mary jumped in front of him and took the bullet herself. She died shortly afterwards in John's arms, while Sherlock looked down at them, completely speechless for once in his life.

And the worst part of all is that this twist could mean the end of his friendship with John, who blames him for not being able to keep his vow to them like he'd promised. This is definitely a turning point in the show, but I have a feeling the trouble has only just begun. These two are going to need each other now more than ever. Let's just hope that Mary's death won't keep them apart for long.