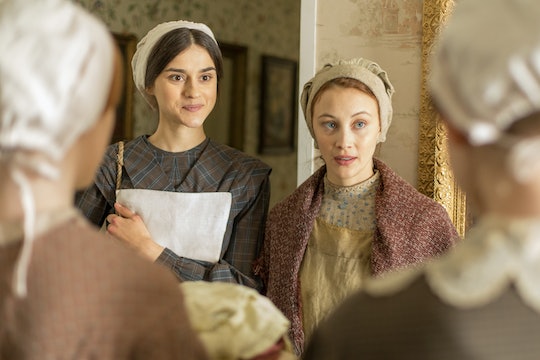 Mary Whitney From 'Alias Grace' Proves To Be An Interesting Character

After the runaway success of Hulu’s The Handmaid’s Tale earlier this year, fans may be clamoring for the next adaptation of Margaret Atwood’s work. Thankfully, Netflix has now released its adaptation of Alias Grace. The novel is historical fiction, so while it’s somewhat based on fact, Atwood took some liberties (as will the series, undoubtedly). One character the pops up is Mary Whitney. But was Mary Whitney from Alias Grace a real person or merely a fabrication by Atwood? She befriends the titular Grace in the series.

The story that inspired Alias Grace is surely one to fascinate readers — Atwood herself was fascinated when she first read about it at Harvard, so much so that she decided to write an entire play and a novel about it. The plot centers around a teenager named Grace Marks who was convicted, in 1843, of killing her employer, a wealthy farmer named Thomas Kinnear, and his housemaid/pregnant mistress Nancy Montgomery. Marks' reported accomplice, James McDermott, was also convicted of the crime — but while Marks was sentenced to life in prison, McDermott was hanged. Luckily for her, Marks did not even have to endure that sentence; she was released from Kingston Penitentiary 30 years after the trial took place.

Marks true involvement remains unknown to this day, though. After her release, traces of her were pretty much lost. A few hard facts are known: Marks and McDermott were real, as were Kinnear and Montgomery. The two victims were indeed lovers and murdered. The other details are, unfortunately, lost to history. Around a decade after the trial, a woman named Susanna Moodie wrote about it in her book Life in the Clearing. However, in an interview with Penguin Random House, Atwood said that Moodie wrote about Marks from memory... so she got a lot of the details wrong. When writing Alias Grace, Atwood was determined to stick to the concrete facts. Since there were so many gaps of knowledge, though, she "felt [she] was free to invent."

During the interview, Atwood used Mary Whitney as an example. Apparently, "Mary Whitney" seemed to be Marks' alias in the photo that accompanies her confession. No one ever discussed it, however. Supposedly, Grace Marks used the name "Mary Whitney" when she left prison and moved to New York. Therefore, Mary was not a real person herself. Since none of the commenters said anything about the name, Atwood imagined what it might have meant. So she made up the character of Mary Whitney for the novel. In the series, Mary is portrayed by actress Rebecca Liddiard. According to The Ringer, Mary Whitney is a fellow servant who becomes a close friend to Grace.

Warning: slight spoilers for the novel ahead! Mary meets an untimely end, but not before teaching Grace about the dangers of men and the wealthy, both as her friend and through her death. Because of this, she serves as an inspiration to Grace throughout the series. Atwood herself was inspired by Grace's real-life alias to create this character and a backstory to the name, which I think is pretty cool. Even though Mary was not a real person, Atwood managed to use what little details about Marks that are known to craft an interesting origin and plot to a completely fictional character.

I'm excited to see how Netflix will take on Alias Grace — and if it resonates with 2017 audiences as much as The Handmaid's Tale did.