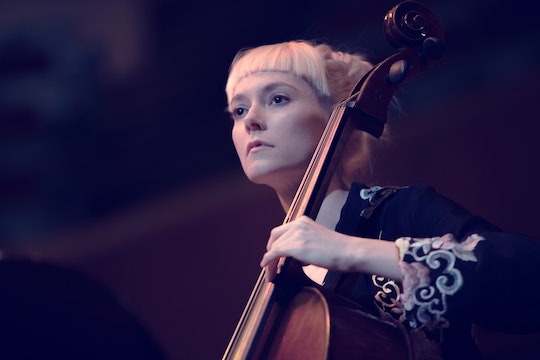 As with every new show that arrives on the scene, people want to know the inspiration behind Netflix and BBC's new thriller, Requiem. For example, is Matilda Grey from Requiem a real person? As the main character of the show, it's through her perspective that the audience explores the spooky mystery surrounding the disappearance of a young girl in 1994 and a terrifying manor house in rural Wales. From what I can tell, Matilda is a purely fictional character, though the story does have some real life inspiration behind it.

According to the official show descriptions, Matilda is a gifted young cellist who begins investigating the mysterious 1994 disappearance of a little girl after her mother's apparent suicide. It appears to Matilda that the two are connected. On the BBC site, Matilda's character is described as being "a brilliant young cellist whose considerable domestic success is about to be eclipsed by an exciting new opportunity in New York."

The description goes on to add that, "As a child, it was her single mother Janice who drove Matilda hard to succeed, and their relationship was often intense and difficult as a result. This was amplified by the fact that Janice was Matilda’s only family, while Matilda’s career was Janice’s only project. Still, Janice was a loving and attentive parent, and Matilda was happy."

But the profile goes on to point out that happy as Matilda may have been, she has always felt a sense of darkness just on the edge of her consciousness. Perhaps this has something to do with the fact that Matilda's only family was her mother. She has no father, siblings, cousins, or even uncles or aunts. The profile stated that she has always had a sort of hole that she has been struggling to fill somehow. Does that mean solving this mystery will solve the hole in Matilda's life?

Regardless, Matilda as a character is not based on any particular real-life person, unless the writers took some inspiration from their own lives. But it turns out that Requiem — though mainly a horror show about ghosts and haunted Welsh houses — does take at least some inspiration from historical fact, way back in the 16th century actually. The show mentions John Dee, a 16th century mathematician and occultist who used to perform seances and attempt to commune with angels and the dead using obsidian mirrors and crystal balls. These kinds of tools show up in the series as well.

But even this historical inspiration is not totally true. The show claims that Dee's son Theodore carried on his work, but the real Theodore died at the age of 13. Not to mention the fact that there's no proof any of Dee's chats with the spiritual realm were legitimate. So while Dee may have provided the inspiration for the story, it is not in any way a biographical series. It's a good old-fashioned horror series of which I really hope there were more on TV right now.

I need hardly point out that a show doesn't need to be based in fact to be thrilling and engrossing. Personally, I'm incredibly excited to spend a weekend scaring the bejeezus out of myself by watching the whole thing by myself in the dark (obviously). It doesn't matter if Matilda is a real person or not as long as I can be made to believe that ghosts perhaps really can communicate with the living via a black mirror. And to be honest, it's not that hard to convince me of things like that.