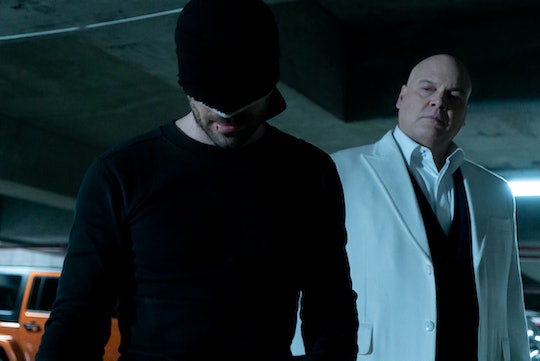 If you haven’t been keeping up with the Marvel crossovers on Netflix, and happened to tune into the first episode of Season 3 of Daredevil, you may be confused to see Matt Murdock’s friends mourning his death. He didn’t die in Season 2, so you’re probably wondering, is Matt really dead on Daredevil? Well, the superhero was last seen being crushed under a collapsing skyscraper in Netflix's crossover series, The Defenders.

Warning: Spoilers ahead for Season 3, Episode 1 of Daredevil

If you haven’t watched the crossover, you’ve missed a few key plot points in Matt’s timeline. On the season finale of The Defenders, Matt and The Defenders team - Luke Cage, Jessica Jones, and Danny Rand — defeat Elektra and The Hand with the help of Colleen Wing, Misty Knight, and Claire Temple. Matt offers to sacrifice himself for the greater good, and goes down with the building after the team lines it with explosives. His friends believe that he is dead, but in a final scene, Matt is lying injured under the care of a nun — Sister Maggie — which indicates he survived the explosion that tore down the building.

In the Season 3 premiere, Matt is seen right after the building collapse floating through the city’s drainage system and is ultimately dumped out of a sewage pipe. A cabbie drives by and finds Matt, who musters up the strength to tell him to take him to his confidant, Father Latom. The driver drops Matt off at the church, where Father Latom and Sister Maggie nurse Matt back to health. The whole time, Matt is consumed by the loss of Elektra. Because of his deep love for her, he feels guilty about her death.

In the meantime, Matt’s best friends, Karen Page and Foggy Nelson are trying to pick up the pieces of their lives after hearing of his death. Karen struggles to pay the rent on Matt’s apartment in the hopes he might still be alive, but Foggy keeps trying to convince her to move on. She convinces Foggy to split the rent with her for just another month, and he agrees, but he seems to be dealing with guilt over Matt’s death, regretting his decision to get Matt the Daredevil suit the last time he saw him.

Meanwhile, while his friends mourn his loss, Matt is getting lessons of tough love from Sister Maggie. He has been questioning his faith and his future as Daredevil, but Sister Maggie convinces him to get back into the fold. He begins training, and eventually goes back to the streets in his original black Daredevil suit. Because he hasn’t fully recovered from his injuries (he’s lost some of his hearing in one ear), he is defeated by the thugs he is fighting, but not before saving a father and daughter from their grasp.

At the end of the episode, fans are reunited with Season 1 villain, Kingpin Wilson Fisk, who is serving time in prison. He is offered a deal by FBI agent Ray Nadeem, who offers to help Fisk’s wife Vanessa in exchange for his cooperation. Fisks takes the deal, hinting that he’ll be back on the streets of Hell’s Kitchen to face Matt yet again.

As a fan of Daredevil, I’m just really happy that Matt is alive and well. I hope to see Matt shed some of his demons after surviving such a cataclysmic incident, and turn himself into a bigger, badder, version of the Daredevil. Whether he embraces this rebirth will be seen throughout the third season, but you can count on Fisk’s return to fuel Matt’s fire.

Season 3 of Daredevil premieres on Netflix on Friday, Oct. 21.