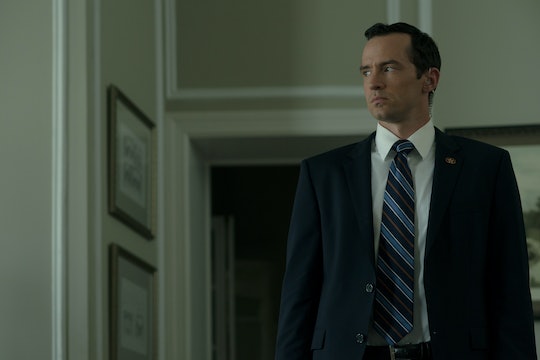 Is Meechum Back On 'House Of Cards' Season 4? It's The One Question Every Fan Needs Answered

In Season 3, Meechum's role wasn't all that noteworthy. (For the record, I guess that's kind of the point when you're on the president's detail?) Sure, he made a few threats at Thomas Yates in order to protect Frank from himself, but there's really no juice to Meechum's character all throughout the season. And after *that* Season 2 scene, I was disappointed that Season 3 just felt like a fizzle and flop as far as his character was concerned. Yet the Meech is back and more loyal than ever in Season 4.

Meechum's loyalty to the Underwoods has always been his greatest professional asset. It's what got him promoted to Claire's Secret Service detail and ultimately, what got him rehired to the Underwood's service in the first place. It should come as no surprise that both Frank and Claire value unwavering loyalty above all else — it's probably the second most-important trait they look for in a friend, aside from like, the ability to ruthlessly and silently kill, destroy, and totally destruct anyone standing in their way — so the fact that Meechum fits so squarely into that role obviously really rubs Frank and Claire the right way. Due to the fact that this is an election year for Frank (and an incredibly important one at that), I can only imagine the need to keep a tight lock on his most fervent and loyal supporters has increased tenfold. Plus there was that adorable scene in Episode 1 of Season 4 when the Meech takes off Frank's glasses after he falls asleep. Was it a sign of love to come?