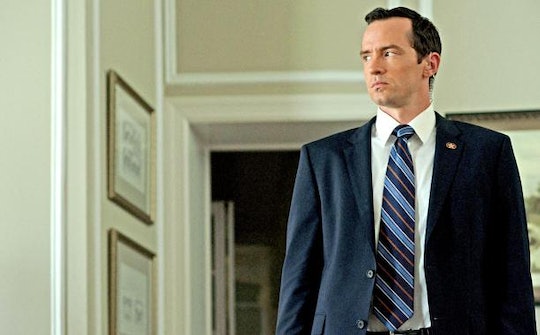 (Warning: this post involves major spoilers from Episode 4 of House of Cards Season 4.) If you're in a state of shock after watching Episode 4 of Season 4 of House of Cards, know this — you're not alone. We are in this emotional turmoil together, because it is kind of hard to believe that Meechum might be dead on House of Cards Season 4. Meechum. Our Meechum. The Meechum we all grew to love because he respects his country and his president, even if he had an unexplained threesome with Frank and Claire in Season 2. Let's forget that, though, and focus on the fact that we lost a good one in Episode 4.

On Episode 4 of House of Cards, there was a shooting. A really, really bad shooting that will change the course of the entire season. While at a rally, Lucas — who has really just screwed a lot up at this point — opens fire on Frank. We know that Frank and Lucas have a history, but this maneuver by Zoe's ex is drastic, to say the least. Sure, Frank isn't a great guy, but an assassination attempt?

To make matters worse, Meechum — being the loyal guy he is — saves Frank's life. There's just one problem with that — it means he had to take a bullet for the President. As you can imagine, that's not a good thing for our dear Meechum, as we find out on the news broadcast just moments later that the shot meant for Frank killed him.

In case you're wondering why you should even care about Meechum, allow me to remind you. Meechum started off as a temporary bodyguard for Frank. He had a few hiccups (firing a gun into an open civilian street is a big no-no), but eventually found himself set as Frank's permanent bodyguard. At one point, he watched over Claire after a few threats, which led to the two becoming... close. As mentioned before, there was a moment between Claire, Frank, and Meechum that alluded to the three having a threesome. We never heard anything more from that after Season 2, and I think that's OK.

Eventually, Meechum was promoted to Secret Service when Frank took over the presidency after Walker resigned. Finally allowing Meechum to be rewarded for his hard work, service, and loyalty over the years.

So, is this the last we see of him? Unless Meechum comes back in a daydream of Frank's — which could be very possible — I think this is the last we see of Meechum. I wouldn't be completely opposed to a montage of the good times with him, but it might be too late to request that of Netflix. You'll be missed, Meechum.