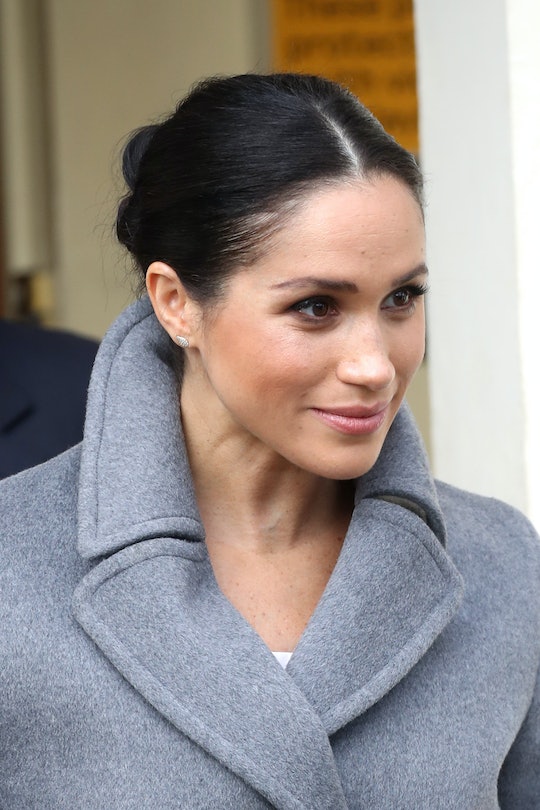 Meghan Markle Was Back On Instagram For A Hot Minute, But Don't Get Your Hopes Up

Though there's so much the world has gained from Meghan Markle joining the royal family, there's decidedly one thing we've lost, and that's her perfect social media presence. As part of royal protocol, members of the family are forbidden from having their own social media accounts, instead posting photos through Kensington Palace. But as of today, many people may be wondering: Is Meghan Markle back on Instagram? The Duchess of Sussex's account was mysteriously reactivated for a brief moment, and nobody is quite sure why.

Early this morning, royal commentator Omid Scobie posted a screen cap of the former actress' Instagram, seemingly reactivated. On it is Markle's old photo, as well as her casual 3 million followers (and that was before becoming a duchess). "For those of you asking, Duchess Meghan is not making a return to Instagram," he wrote on Twitter. "You can blame a system glitch for her account resurfacing on the app this morning."

But how likely is it that a "glitch" could reactivate an account? Well, it's hard to say. It's also not impossible to rule out that Markle perhaps needed something from her account, or just wanted to check in, and simply activated and then unactivated it within a few moments. (Hey, if you had to go without the 'gram for the rest of your life, you'd probably be tempted, too.) Either way, as Cosmopolitan reported, the account is not here to stay, much to our disappointment.

Though there are, uh, almost an unlimited number of perks to living the royal lifestyle (wearing tiaras, living in a palace and sitting on enormous amounts of wealth among them) there are definitely strict rules placed upon members of the family, as INSIDER has reported. Among them, the family is not allowed to eat shellfish (as it could potentially cause illness), sign autographs (which could be copied), and have a personal social media page of any sort, the lattermost of which newly minted royal Markle has had to adjust to.

However, despite being banned from social media apps, the royal family does indeed use smartphones, including the Queen herself, as Cheatsheet reported. Mostly, this has to do with ensuring that all members of the family can communicate with one another as well as staff in the most efficient way possible. Given that this is the case, the idea that Markle may have had to re-download Insta to briefly check in on something is all the more plausible, though it has not been confirmed that this is what happened.

Interestingly, the "no social media" rule does not apply to every person related to the family, only the working royals, as The Mirror reported. This is why Princess Eugenie does have an Instagram while Markle doesn't. Some may wonder if it has to do with direct line to the throne, but it's really more about who is actually doing royal engagements as a representative of the family, and who is not.

Despite some disappointment that we will no longer be seeing Markle's empowering memes and perfectly styled shoots from her former lifestyle blog, The Tig, it's fair to say that perhaps the royals don't need to be posting updates to the 'gram, given that they are, well, some of the most photographed and documented people alive.

Either way, today's glitch was a false alarm, sadly enough.