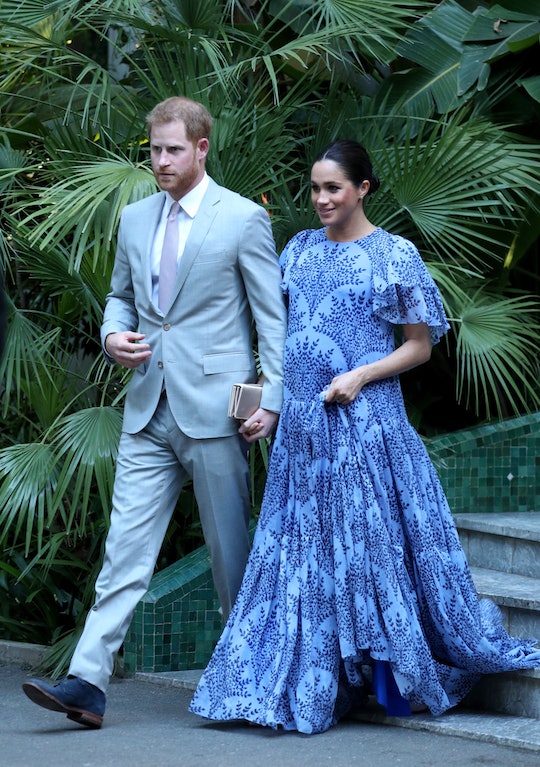 As you may have noticed, there's a lot of speculation surrounding the Duchess of Sussex's pregnancy. But perhaps the most pressing question on people's mind is whether Meghan Markle is having a boy or a girl. Although she and Prince Harry have not released any official statement on the subject, a new report suggests they may know more about their bundle of joy than they're letting on.

On Wednesday, a source reportedly told Us Weekly that Markle apparently spilled the beans about her baby's sex during her baby shower in New York City last week. Spoiler alert: According to Us Weekly, Markle reportedly told her friends that she is having a boy. Kensington Palace did not immediately respond to Romper's request for comment about this report.

Understandably, this may come as a shock to royal fans. Since the couple first announced they're expecting their first child together in October, they've been adamant about not revealing too much about their baby-to-be, for obvious reasons, and they certainly deserve their right to privacy right now.

But if this report is true, and they do know that they're having a boy, this is contradictory to things that they have said in the past about finding out the sex of their child.

In January, during an official royal appearance, Markle told well wishers that she was "keeping it as a surprise," according to People. And earlier this month, during an official royal appearance, Markle herself said that she and Prince Harry "don't know" if they're having a boy or a girl, according to Harper's Bazaar. "Yes, we decided to keep it a secret," Markle reportedly said during this appearance.

So, it's a little unclear what could have caused Markle and Prince Harry to change their minds and find out what they're having before she gives birth, or all of the sudden spill the beans.

But when it comes to unnamed sources, it's important to remember to take this kind of report with a grain of salt. When they are ready to tell the rest of the world, they will. But until then, this is all pure speculation.

Another reason that people should take this new report lightly? Just a few days ago, people were convinced that Markle was having a girl. This was because her baby shower heavily featured pastel colors and pink flowers, which led some people to believe that this was a nod to the sex of her baby, according to AOL. On top of this, a video reportedly taken from Markle's baby shower also showed a lot of pink in it, which also fueled the "girl" rumors, according to The Sun.

Even people on Twitter seem to be convinced that she is having a girl.

The good news? We won't have to wait too much longer to find out what Markle and Prince Harry are having. Markle is reportedly due in late April, or at the beginning of May, according to Town & Country.

Until then, let's try to enjoy these last few weeks of Markle's impressive and oh so cute maternity style.