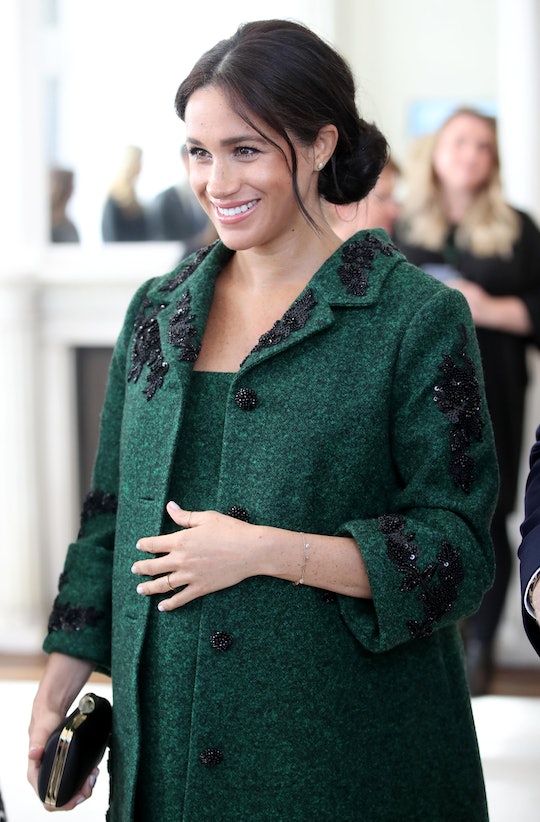 It is time for a very important royal investigation. After the Duke and Duchess of Sussex started their own social media account and subsequently brought us unreasonable amounts of joy by doing so, in a very short amount of time, it was pretty much assumed that there was an assistant running their posts and captions. Or... is there? Is Meghan Markle actually running her own Instagram account? Some sleuthing might be able to tell us.

First, as People pointed out on Tuesday, some followers think Markle is running the account just based on the way the posts are written. For example, as Marie Claire reported, many words have erred toward the Americanized spelling, such as "organization" instead of "organisation." On another occasion, the word "diapers" were used, while "nappies" are the term for them in the United Kingdom.

Secondly, on one of the account's first posts, a cute camera emoji was used to credit the photographer. That's a move that only a seasoned social media pro would know to do, and let us not forget, Markle used to be one herself, as Hello! Magazine reported.

Here's where it gets more interesting: despite the fact that the captions are written in the third person, and signed from whomever they are written by (Harry or Meghan or both, in this case) there are other clues that Markle is the one behind the grid, yet.

Prior to her becoming royal and deleting all of her social media accounts, Markle was actually a pretty great 'grammer. For those who remember her page, you'll recall that her photos were edited in a very similar way to the ones on the Sussex family account. Specifically, the photos have a white border around them, which is characteristic of that account, but no other royal accounts edit the pictures in that way.

Given that the page is well-branded, with a custom-made logo, and a few quote posts that are clearly well-designed, it's obvious that the Duke and Duchess are, at minimum, utilizing the help of a professional. However, that's par for the course for most public figures, who likely rely on photographers, editors, and designers to make their pages as seamless as possible. It doesn't, however, mean that they aren't the ones actually running the account.

After getting engaged to Prince Harry and leaving her personal social media due to royal protocol, rumors have swirled that she's been eager to get back on the platform. ELLE reported that as late as last year Markle had a secret Instagram account on which she was keeping up with her close friends and family, but left in an effort to preserve her mental health.

Given that she had millions of followers when she had to close her old one, it's understandable that she'd be eager to see what's happening on the 'gram again.

So much so, in fact, that she made headlines last December for temporarily reactivating her account, as E! News reported. When you delete an Instagram account, you don't actually delete it, you just deactivate it, according to the app's help center, and for a period of time, you can reactivate it as well. Whether Markle was just trying to catch up on some posts, or accidentally signed in when she didn't mean to isn't clear, but it looked like she at least had the app on her phone, if she has a personal one. (It would be tempting not to get back into it, wouldn't it?)

Regardless, it's exciting that the family is so willing to share pieces of their life in such a personal, direct way. Though the royal family traditionally stays off accounts like those, it would be Markle that brings some modernity to the traditions, and makes her followers very, very happy in the process.