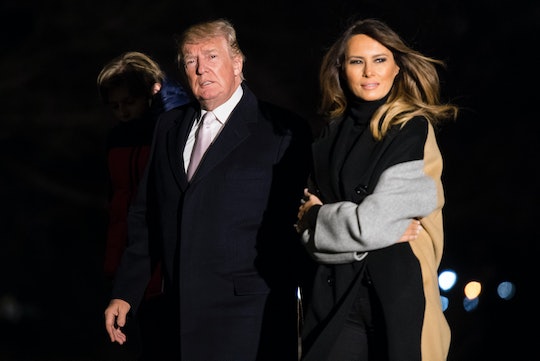 Last week, the first lady made headlines due to her canceling an official trip to Davos, Switzerland with the president. Which is why some people were wondering whether Melania Trump was at the State of the Union on Tuesday night to hear her husband's address in person.

Melania ended up taking a separate car to the Capitol building from the White House, according to CNN, which is a huge break from a longstanding tradition of the first couple arriving to the event together. Sarah Huckabee Sanders told CNN that it wasn't that big of a deal and that the first lady only went ahead so that she could greet the guests and the president could head straight in.

Whatever you make of the two car arrival, Melania made it — the State of the Union is just one of those official events that you can't miss, no matter what the media is saying about your personal life.

Earlier Tuesday afternoon, Melania tweeted about the 15 guests she would bringing to the speech, and they were all recognized at some point during Trump's speech. She wrote:

I will be joined tonight by an honorable group of Americans. Sitting with me are heroes who have served our nation in times of need, families who have suffered at the hands of evil, and citizens who have embraced the American dream.

The group included first responders to this years' hurricanes and deadly California wildfires and military service members. More controversially, four parents of teenage girls who were reportedly murdered by MS-13 gang members, and a U.S. Immigration and Customs Enforcement agent who has arrested 100 members of the same gang, also accompanied the first lady, according to The New York Times.

Although all of those guests are admirable, the Trump family's official "box" of guests at the State of the Union tells a very particular story, which was illustrated in his speech. By honoring an ICE agent and highlighting one Long Island, New York City gang, Trump is making an impassioned case against immigration for everyone, including those formerly protected by humanitarian immigration statuses.

The first lady was due for an appearance. Since the beginning of the new year, she and Trump haven't been out and about together. Some on social media believe that might have something to do with the reports that surfaced in early January about Stormy Daniels, who previously alleged that she had a sexual encounter with the president in 2006 (she has recently denied those reports, though). Romper's request for comment from the White House regarding the allegations has not yet been returned.

The weekend the report came out, according to CNN, Melania wasn't seen with the president on their regular Mar-a-Lago trip. She was seen on Jan. 15, returning to D.C. with the president from Florida and walking onto a plane in the rain, with her husband carrying an umbrella — but not over his wife.

Last week, the couple didn't acknowledge their 13th wedding anniversary on social media or, according to The New York Times, spend the evening out and about on the town for dinner. When she posted on social media about her husband's one-year anniversary in office, she chose a picture that just showed her with a security escort, without her husband. Then, she canceled her trip to Davos with her husband at the last minute, citing a busy schedule, The Washington Post reported.

Stephanie Grisham, the first lady's director of communications, tweeted that the media was getting everything wrong about the Trump's marriage. She wrote on Twitter:

The laundry list of salacious & flat-out false reporting about Mrs. Trump by tabloid publications & TV shows has seeped into "main stream media" reporting. She is focused on her family & role as FLOTUS — not the unrealistic scenarios being peddled daily by the fake news.

Judging by Melania's appearance on Tuesday night, the state of their family union is very strong. Even if they have to take separate cars to achieve that effect.