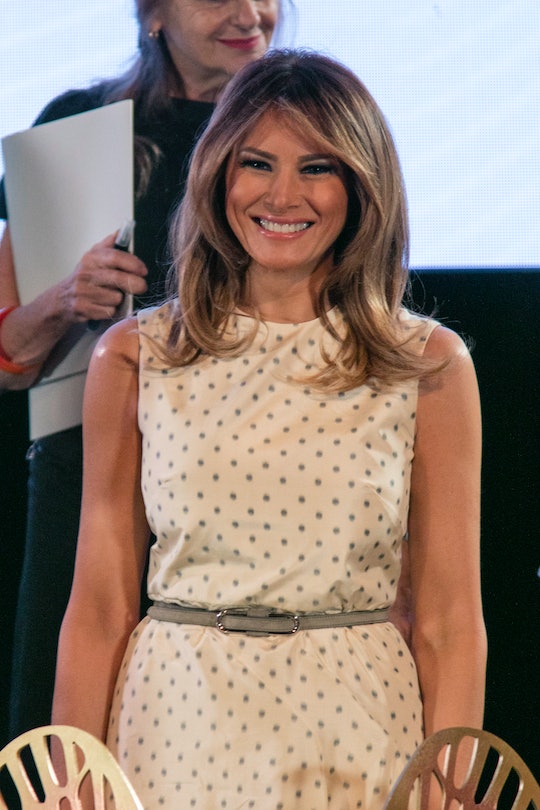 Is Melania Trump Religious? Here's What The First Lady Has Said About Her Faith

With his every thought seemingly posted to Twitter most of us feel like we know a great deal — too much even? — about the POTUS. But even after two years his wife is still a bit of an enigma; she is quiet and almost seems shy, she’s poised, but reserved. There’s so much about her we don’t know. That’s why many might find themselves asking, especially around the holidays when her Christmas decorations go viral, is Melania Trump religious? And if so, how will that impact her Christmas celebration?

Though the faith of Donald Trump has been discussed in-depth by people who both love him and hate him, the personal faith of the first lady has been much more mysterious. Little attention has even been paid to what she does on her Sundays, or what her belief system is. She made it through the entire presidential campaign without the topic ever becoming a point of interest, according to the Washington Post.

But she does have a faith: she’s Catholic, according to CNN. That fact came as a surprise to many as it was revealed through a blink-and-you-missed-it moment when she met the pope in 2017. After the were introduced, Melania held out a rosary for the pope to bless, according to CNN.

The pontiff put his hand over hers and made the sign of the cross, something that is viewed as a high honor for a Catholic, according to CNN. She later posted to social media that the meeting was an "honor" she felt humbled by and that it was a day she will never forget. The next day Melania’s spokeswoman confirmed for the press that that the first lady is indeed a practicing Catholic, as CNN reported.

Though the Trumps were married in an Episcopal church and ceremony in 2005, the Washington Post noted that Melania carried not a bouquet but a rosary down the aisle. This could be a sign of how deep her faith is to her personally.

During her first public speech as the first lady she also gave a hint about her faith, opening her remarks with the Lord’s Prayer, according to Fox News. The moment took place at a rally in Orlando in February, 2017.

So, if she feels strongly about her faith, why do the White House Christmas decorations, so widely criticized the past two years, seem to feel so impersonal and cold, as noted by the Washington Post? That answer could come from the first lady’s childhood in Slovenia. According to Good Housekeeping, the Communist regime that was in power during Melania’s childhood was atheist and banned the practice of religion. Since her father was a member of the party, her family at least maintained the appearance of being atheist, Good Housekeeping reported, whether or not they actually were. It’s unknown when she picked up the Catholic faith.

So, perhaps, she’s just celebrating in a way that feels natural to her and in a style she finds interesting. Her background is as a model, and maybe she’s just bringing some of what she views as artistic flair into the White House, nontraditional as it may seem. And, to be fair, it’s not actually the entire White House that got the cranberry treatment, just that one odd hallway, as seen in this ABC News footage:

The first lady even defended her choices in a town hall meeting, according to USA Today, saying: "We are in (the) 21st Century and everybody has a different taste. I think they look fantastic. I hope everybody will come over and visit it. In real life, they look even more beautiful."

Nonetheless, it’s likely she’ll be with friends and family on Christmas, in Mar-a-Lago where the Trump’s celebrated last year, according to the South Florida Sun-Sentinel. And however she chooses to recognize her faith on Christmas this year, it's a safe bet that it won't be blasted on Twitter.