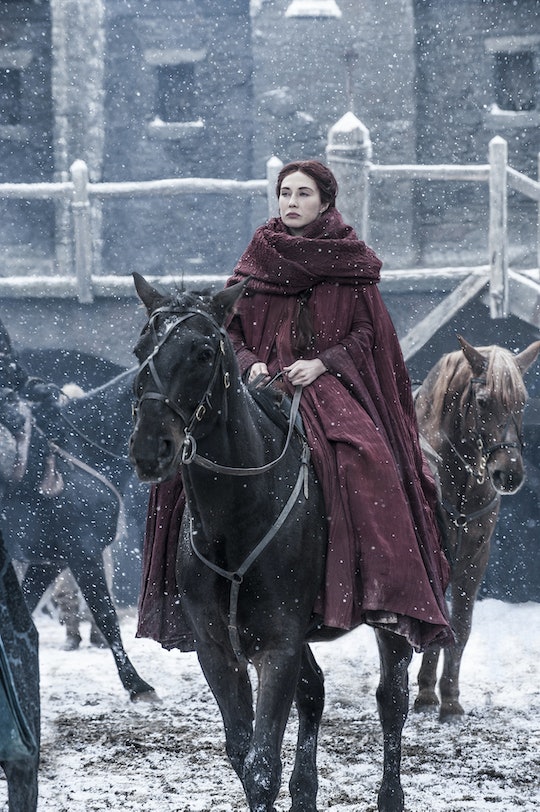 Is Melisandre Old On 'Game Of Thrones'? Viewers Were Asking

Now that we know that Melisandre isn't going anywhere anytime soon on Game of Thrones, we also know that she has a lot more going on than the possibility of bringing back Jon Snow. Like Melisandre turning into an old woman, just to name one of the most talked-about moments from the Season 6 premiere of Game of Thrones. After the first episode aired, many viewers were wondering, Is Melisandre actually really old?

Or is this just another version of her, in addition to the beautiful dark red-haired witch we've come to worship in order to bring back our beloved Jon Snow? At the end of the season 6 premiere of Game of Thrones we saw Melisandre take off her signature ruby necklace and become a withered old woman we've never seen. It's unclear as of yet what exactly is so mystical about Melisandre's necklace, and if her necklace is the key to Jon Snow's resurrection, but if that's the case then we'll take a nude and elderly Melisandre any day.

Long before we actually wanted to see Melisandre do her work because, Jon Snow and all of that, Carice Van Houten was none too shy when talking to Access Hollywood about her character Melisandre and the mysterious past we know next to nothing about:

"I don’t how old she is, but she’s way over 100 years, so she is a wiser spirit, in a way, but it’s difficult for me to say too much because A — we want it to at least stay sort of a mystery and B — I didn’t read the books."

But seeing Melisandre as an old woman, weak and very much the opposite of her usual seductive self, it begs the question of Melisandre's age. We know that she is a witch, with the ability to see visions in fire and birth spirits to do her bidding, and something tells me that those sorts of powers aren't cultivated over night. So it is plenty possible that Melisandre is old, much older than we see her when she has her ruby necklace on, with her milky smooth skin and red hair that always inexplicably matches her capes.