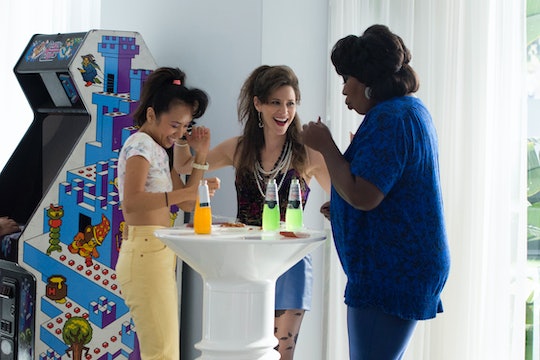 Netflix's new series GLOW dives into the world of campy televised female wrestling in the 1980s, centered around a group of actresses, dancers, and models who find themselves auditioning for something they never expected. One such woman is Melrose, who was described in the casting announcement as a "Hollywood party girl" and is portrayed by actress/comedian Jackie Tohn. GLOW is inspired by another show that shared its name from 1985, though there are as many differences as there are similarities between the two series. But considering the line between fiction and reality is thin on the show, some viewers might be wondering: Is Melrose from GLOW based on a real person?

The original GLOW (which stands for Gorgeous Ladies of Wrestling) was all about skits and wrestling matches, but Netflix's version is a fictionalized exploration of what was happening both on and off camera. The source material may be grounded in reality (an '80s version of reality, anyway), but the Netflix series takes liberties with the truth. That means it's hard to tell if Melrose has real inspiration. None of the women who worked on the original show used the name Melrose as a stage name, nor was it anyone's real name. However, her party girl descriptor could provide some hints.

One of the women wrestlers on the original GLOW went by the stage name Hollywood. It's pure speculation, but it's possible that Melrose's Hollywood party girl origins could be a nod to that wrestler. It's not the most solid of connections, but it's possible. Hollywood's real name was Jeanne Basone, though the nickname wasn't one she came up with herself. According to Basone, GLOW creator Matt Cimber took one look at her and dubbed her Hollywood, assigning her partner the name Vine in reference to the famous intersection. Their personas weren’t supposed to be glamorous like one might expect; instead they dressed like punks and took on street fighter identities.

Melrose’s kind of punky mall goth styling in the released stills for the series could be referencing Basone’s Hollywood, but there’s really no way to know yet. It’s not clear how close the fictional characters are supposed to hew to the real-life women. There were also so many women involved in the real GLOW that some characters could be condensed versions of a few different people, as sometimes happens in adaptations of real events.

There's a chance Melrose might be based on a real person, but it's just too soon to tell where the inspiration for her character came from.