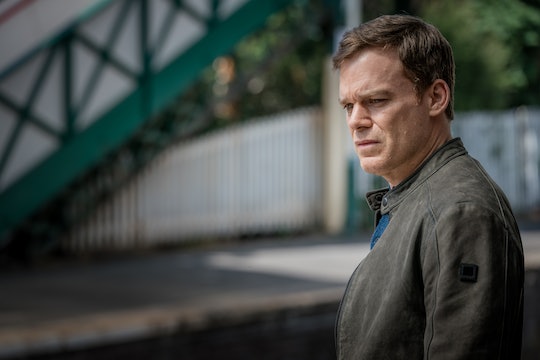 Netflix's newest thriller-drama, Safe, starring Michael C. Hall, is about a widowed dad whose teenage daughter turn up missing, and it definitely has all of the trappings of an intense true crime story. So it makes you wonder, if Michael C. Hall’s character on Safe is based on a real person. Although the show’s premise and even trailer make it seem like a ripped-from-the-headlines type of situation, it was created by mystery and thriller crime novelist Harlan Coben. So since the story was made up just for the Netflix series, it’s safe (get it?) to say that Hall’s character is also purely fictional, even if the terror he goes through feels all too familiar.

That doesn’t mean that the story itself isn’t still intriguing, however. Coben has written more than two dozen books in the past 23 years and when creating Safe, he used the same formula as he has for his stories that were in book form. Coben, who also serves as executive producer on the show, told WorldScreen.com in an interview that his idea for Safe as a TV show rather than a novel was due to the fact that he wanted it to be watched as a marathon, much like he prefers his books to be page turners that keep readers flipping through chapters almost nonstop. And like his books, Coben created Safe with the idea of another "shocking ending" in mind to keep viewers thinking even after they’ve finished the season, which he calls "one eight-episode story."

Although the story that outlines Safe seems like it could be real in a sense, since it’s about the abduction of a young girl, Coben said that he came up with it by looking at gated communities in general. "We think we build those walls to keep the bad out, but maybe sometimes we build those walls and keep the bad in," he said in the same interview. That idea is actually where the title, Safe, comes from. But since this is just another story of the author's imagination, Hall’s character on Safe is also made up.

Safe premieres on Netflix in an eight-episode first season on May 10 and since Coben called the entire season one long story, it’s probably going to be hard not to watch it all in one sitting. In the trailer for Safe, Hall is shown as a concerned but not overbearing dad who sets out to find his daughter and figure out what happened to her after attending a party one night. While talking to his daughter's friends and different neighbors around the gated community, it's clear that there’s probably going to be a lot more to the story than it might seem like at first. It basically seems like the first season of the AMC-turned-Netflix series The Killing in its dreary but interesting story that will follow Hall’s character as he tries to figure out what happened to his daughter when it seems like the authorities can’t.

Even though Safe isn’t based on a true story or even a book, the novelist behind the creation of the new show is sure to bring plenty of intense and gripping content in the first season alone. Hall’s character isn’t an actual person in real life and the story is completely fictional as well, but that just leaves the door wide open for more seasons afterward, should that be the direction Netflix decides to take the show, even if the mystery of Season 1 is wrapped up by the end of the eight episodes.

Safe is now currently streaming on Netflix. Go check it out!