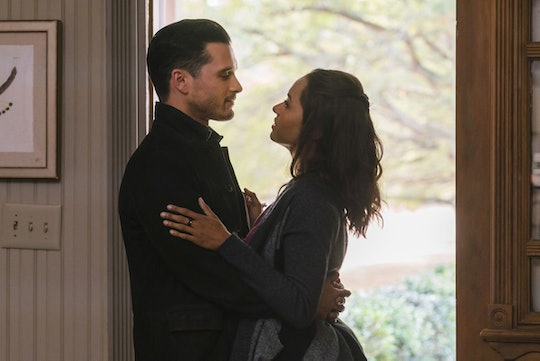 Michael Malarkey's Time On 'TVD' Isn't Over Yet

It was a punch to the gut when The Vampire Diaries killed off Enzo in a shocking twist that left poor Bonnie all alone yet again. And the fact that it was done by Stefan's hand (a direct parallel to how Tyler's death was on Damon's) makes the whole ordeal all the more heartbreaking. But will this particular death stick? Is Michael Malarkey leaving The Vampire Diaries for good or will he, like many others, find a supernatural loophole that will allow him to return to the land of the living, against all odds? While I can't speak for the fact of how this could happen, I can say with certainly, that we haven't seen the last of this dreamy vamp this season.

During a recent interview with TVLine, Malarkey opened up about his on-going involvement in the show even after Enzo's untimely demise, assuring fans that his character could still pop up in the series finale. "I’ve gone in and done a couple bits here and there," the actor stated. "It’s nice to be able to wrap this thing up the way they’ve done it, to know this is the end, and to do it justice." Now, of course, he couldn't elaborate on how he is able to show up in Mystic Falls again, but honestly, is it really even that important at this point? This show has had more dead characters return in some form or another than probably any other show on TV. They started doing it before it was cool.

Granted, it's still going to be devastating to watch Bonnie have to cope with losing yet another person that she loves. (Seriously, can't Bonnie ever have one nice thing in her life?) So get ready to feel some *emotions* nonetheless. That being said, Enzo won't be the only character returning from the grave during the latter half of this final season. Chris Wood will be reprising his role as Kai during the Feb. 17 episode as well. So maybe whatever brings him back will also be what brings Enzo back as well.

Right now, it's anyone's guess regarding how this will all play out. But it's good to know we haven't completely said goodbye to this character forever. Well, at least until the series comes to a permanent close in March. But hey, there's always a chance some of them could pop up over on TVD's spin-off The Originals, right? Because if there's anyone who has got this living forever thing down pat, it's the Mikaelson clan.