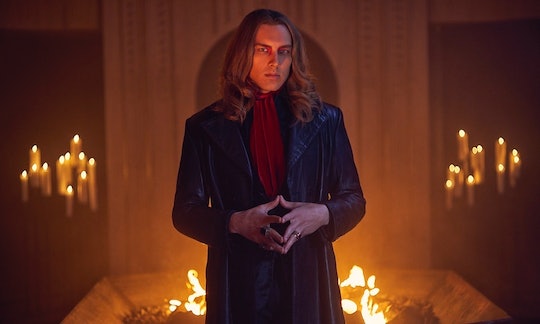 One thing has been clear from the very beginning of American Horror Story Season 8: Michael Langdon is up to no good. Over the course of nine episodes, flashbacks have revealed the trail of bodies he left in his wake as he came into his identity as the son of Satan. He's obviously evil. But fans have begun to wonder if there's actually a twist awaiting them in the final episode of the season. Is Michael really the Antichrist, or is it someone much more unexpected?

A few Redditors have speculated that Michael isn't who everyone thinks he is, but user zy-cray appears to be among the first to have posted a thorough theory on the subject. They proposed that Michael wasn't the true Antichrist, but just a tool the Devil was using to clear the path for his real heir. The actual harbinger of the end times was Mallory, the too-good-to-be-true witch who Cordelia declared the next Supreme.

It may seem absurd for kind-hearted Mallory to be the Antichrist, but that's actually the very reason why she might be. Michael has been so undeniably villainous from the beginning that he could be a red herring, whereas Mallory's sweetness has allowed her to infiltrate the witches and survive until the end.

Redditor zy-cray pointed out that Michael didn't fit the Biblical description of the son of Satan. "In the Bible (if I remember correctly) the Antichrist is basically said to seem morally alike to Jesus in the beginning," they wrote. "Only the purest hearts would be able to differentiate him from (the second coming of) Jesus."

Michael has been too evil from the very beginning, making him immediately suspicious. Mallory, on the other hand, has been the very definition of pure at heart. She raised deer from the dead, saved her friends from choking on Sno Balls, and even tried to go back in time to prevent the Romanovs from being executed. If she's not preternaturally good, then she's a pretty incredible faker. But as zy-cray noted, Lucifer himself was the angel of light once.

Mallory's powers also seem unusual. Many of the witches have stated that they never saw anything like what she can do, and she's the only person who has been able to genuinely frighten Michael so far. That may be because she's the one who will kill him in the end, but it could also mean that viewers have been receiving the wrong clues all along. The Reddit user did add that Mallory's abilities vanished as soon as Cordelia cast a spell to prevent demonic entities from gaining entrance to Miss Robichaux's Academy. That can't be a good sign.

But if Michael isn't the Antichrist, then what is he? It has been suggested that he's merely a super-powerful warlock, or even an archangel himself. There was an archangel named Michael in the Bible who led God's armies against Satan during the war in heaven. If Michael Langdon takes inspiration from his namesake, then perhaps Michael defeating Mallory will actually be the thing that saves the world.

Papa Legba says he's the Antichrist. Billie Dean Howard says he's the Antichrist. He has the mark of the beast and has all the omens for the Antichrist according to the Church of Satan. A shadow of the Devil appeared behind him. His powers work in the Cortez and he can bring people back from Hell, while speaking to the demons there. He can destroy souls and everyone says he radiates evil. He is the white faced demon and you even see him as a demon briefly in his interview with Mallory. He aged a decade overnight and John Henry says that his powers are akin to demonic possession, not warlock magic.

Hard to argue with that! Still, I'm not ruling out the idea that there's something more than meets the eye happening on Apocalypse. Mallory has been kept to the background for such a powerful character, and her goody-two-shoes vibe has seemed off from the start. Maybe I'm being too cynical and she really is just a good person, but there's always a chance that Mallory is hiding something. She might not be the Antichrist, but there could be other tricks up her semi-sheer bell sleeves.