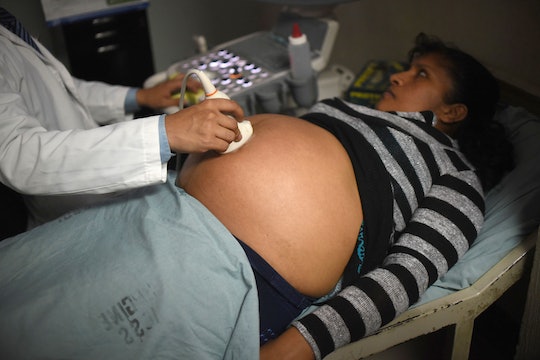 Is Microcephaly Treatable Or Curable? Zika Might Be Linked The The Condition

The World Health Organization official declared Zika a global emergency Monday after it spread to more than 20 countries, including the U.S. Zika is especially dangerous for pregnant women, because the virus can cause microcephaly in fetuses. Is microcephaly treatable or curable? While the virus has been around since the '40s, doctors still haven't found a cure for it or a treatment for the damage it can do to fetal development.

According to Reuters, Zika has continued to spread throughout Latin America and is now a cause for concern in Africa, Asia, and southern Europe. While drug manufacturer Sanofi SA is working diligently to craft a vaccine, there is still no cure for Zika. A cure would be helpful, though, because 26 countries have reported Zika cases — most of those countries are places where low- and middle-class women are especially at risk because they don't have adequate access to family planning services or abortion.

Companies around the world are trying to help in what is quickly becoming a global crisis. Nicholas Jackson, research head of Sanofi Pasteur and head of the Zika vaccine initiative said the company is also trying to create a vaccine for Zika, according to the IB Times:

Sanofi Pasteur is responding to the global call to action to develop a Zika vaccine given the disease's rapid spread and possible medical complications.

The WHO said Zika virus disease symptoms include “fever, skin rashes, conjunctivitis, muscle and joint pain, malaise, and headache,” which mimic other conditions like dengue. While these symptoms usually persist for two to seven days, the virus can go undetected for several days. With no treatment, officials recommend people afflicted with Zika get plenty of rest and liquids.

While the WHO announced that it planned to investigate a possible correlation between microcephaly and Zika on Monday, the organization said it could definitely link Zika to neurological abnormalities in infants, according to a WHO press release:

The experts agreed that a causal relationship between Zika infection during pregnancy and microcephaly is strongly suspected, though not yet scientifically proven. All agreed on the urgent need to coordinate international efforts to investigate and understand this relationship better.

The Washington Post reported that microcephaly is a neurological condition where children are born with small heads due to incomplete brain development. While other genetic and environmental factors are linked to microcephaly, the condition can leave children with no symptoms. However, in more severe cases, children are unable to talk and walk and require around-the-clock care. In fact, the WHO said microcephaly can also lead to convulsions in extreme cases. Ganeshwaran H. Mochida, a pediatric neurologist and researcher at Boston Children’s Hospital told The Post that viral infections (like Zika) occurred in the mother’s first trimester of pregnancy.

While there is no cure to microcephaly, fortunately intervention treatments including speech and occupational therapy have helped affected children. But it is important to note that proactive, comprehensive care is key.