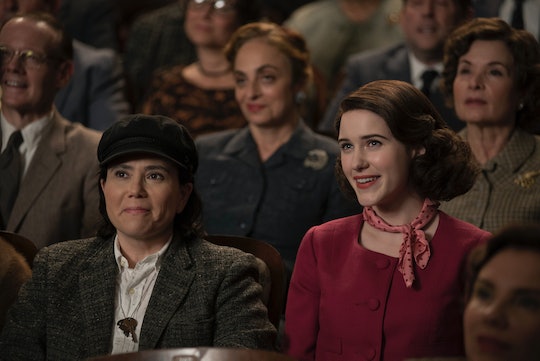 Midge From 'The Marvelous Mrs. Maisel' Was Influenced By A Popular Female Comedian

With a two-season pick-up already underway, Amazon's The Marvelous Mrs. Maisel is Amy Sherman-Palladino's first series to last more than one season since Gilmore Girls. The pilot premiered last March as part of Amazon's spring pilot showcase and, with much critical fanfare Mrs. Maisel was immediately greenlit for two seasons. The period comedy features some historical figures from the late-1950s/early-1960s comedy scene in New York, which may have some viewers wondering: is Midge from The Marvelous Mrs. Maisel a real person? While she's a totally fictional character, there is one female standup comic to whom Sherman-Palladino looked to for inspiration.

Both the series creator and Rachel Brosnahan, who plays Mrs. Maisel, studied Joan Rivers' early career as character research. Sherman-Palladino also has strong ties to the comedy scene of the era — especially comedians of Jewish descent — thanks to her dad, who was a standup comic at the time. She grew up close with Lenny Bruce's mother as a child, which inspired her to work Bruce into the series as a sort of mentor figure to Midge, who finds herself drunkenly stumbling onstage at a comedy club on the worst night of her life and delivering a hilarious rant that gets her arrested.

In addition to Rivers, Brosnahan studied Phyllis Diller and her own grandmother June, telling Vanity Fair, "She was very similar to Midge in that she genuinely enjoyed the performative elements of being a woman in the 1950s. It made her feel good, genuinely. It didn’t feel like a burden, like it may to some modern audiences watching her go through that performance."

That enjoyment of restrictive 1950s gender roles is one way Sherman-Palladino cites Midge being different from Joan Rivers. While Rivers' comedic identity hinged on feeling out of place in her era, Midge is very much excited to be a happily married 1950s Jewish housewife taking care of two kids. In a different interview with Vanity Fair, Brosnahan explains:

Joan’s comedy came from a place of feeling like she never belonged. She always referred to herself as the ugly duckling. Midge is the opposite. She knows she is beautiful; she knows she is great at what she does, and she will be the first to tell you about it.

It's only when her husband — a struggling comic himself whose only remotely successful bit he stole from Bob Newhart — abandons her that she discovers her own skill for standup. For Midge, the challenge isn't in what's expected of her, but in how to cope with the unexpected.

Said Sherman-Palladino in a Vanity Fair interview about the ways in which Rivers inspired the character:

I’m a massive Joan Rivers fan; the world is sadder without her, and will always be sadder without her. And she had that wonderful mix, that battle of wanting to be accepted on a feminine level—[but] you can’t have that many balls and be accepted on a feminine level. It just doesn’t work that way. It was such a wonderful dichotomy, and she crafted those monster jokes.

She also knew that having a true actress like Brosnahan, rather than a comic, take over the role would be crucial to capturing Midge's raw talent, adding, "Going forward, that’s how we’re looking at Midge’s humor. She’s going to learn how to control that and craft it a little more."

Even though Midge is a fictional character, it seems pretty clear that her real-life influences will shine through on the series. You can catch the first season of The Marvelous Mrs. Maisel in its entirety when it drops on Amazon Wednesday, Nov. 29.