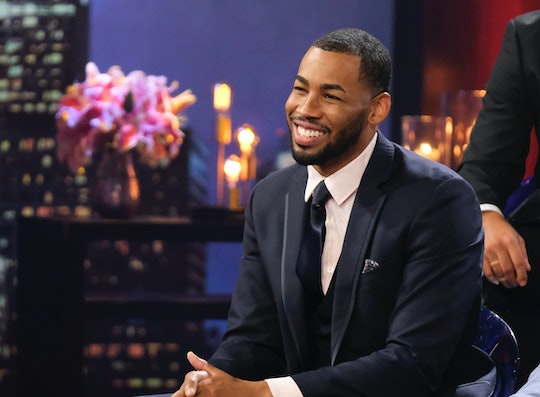 'Bachelor' Nation Is Rooting For You, Mike Johnson, So Get After It

Fans weren't thrilled when Bachelorette Hannah Brown sent Air Force veteran Mike Johnson home. Connections with other contestants may have been stronger, but Bachelor Nation felt collectively slighted over the elimination — how could anybody not fall in love with Mike? Given his popularity, Mike seems poised to take the next Bachelor spot, but he's due for a stint in Paradise first. That means Mike stans are desperate to know if Mike is single after Bachelor in Paradise. He told Hannah in the beginning of the show he already had three queens in his life: his mom, his grandma, and his sister. Now he's still looking for the fourth.

If Mike is indeed still single, chances are he won't be for long. In the wide world of Bachelor romances, Bachelor in Paradise actually has a relatively good track record when it comes to sparking true love: Jade and Tanner; Evan and Carly; Ashley and Jared; Raven and Adam; and Krystal and Chris; Astrid and Kevin; and Kendall and Joe all met on Bachelor in Paradise. Then again, there are plenty of people who don't meet their "person" on Paradise. And a couple of those guys, Nick Viall and Colton Underwood, left Paradise and went on to be The Bachelor. Considering the very devoted fan-base Mike has accumulated, this could be next for him as well.

But of course, Bachelor Mike is only possible if some other lucky lady doesn't scoop him up first. And there's already a line, starting with Demi freakin' Lovato. The flirtation began when Lovato casually stated she'd date him, and Mike responding he'd date her, too. If the two are an item, it's not public (yet), but they'd be pretty darn cute together, in my opinion. Based on Mike's Instagram page, there are no concrete clues of a relationship with Lovato or any other woman.

Then again, to spill his relationship status right now would definitely qualify as a spoiler — and nobody wants that yet.

Mike won viewers over with his warm smile and likability (not to mention the Luke P. call outs), so if he is single, he has a lot of people rooting for him to find "the one," including Bachelor alum, Nick Viall and former Bachelorette, Rachel Lindsey

Mike is "being seriously considered for The Bachelor," Us Weekly reported, and Mike has expressed interest in the position. "It makes me feel awesome, I’m not gonna lie about it," he said to Us Weekly. "It puts a smile on my face to know that people want me to find the love that I want so dearly."

Mike would be the first ever black Bachelor, and if the buzz in Bachelor Nation is anything to go on, people are more than ready. They've been calling for him to take the spot since before he was even eliminated on Hannah's season, which makes it clear he's made an impression on people. I mean, have you seen that smile? What's not to love? Something tells me even if he doesn't end up the lead of the show, Mike won't have to keep looking for love for very long.

Bachelor in Paradise airs Monday and Tuesdays at 8 p.m. ET on ABC.