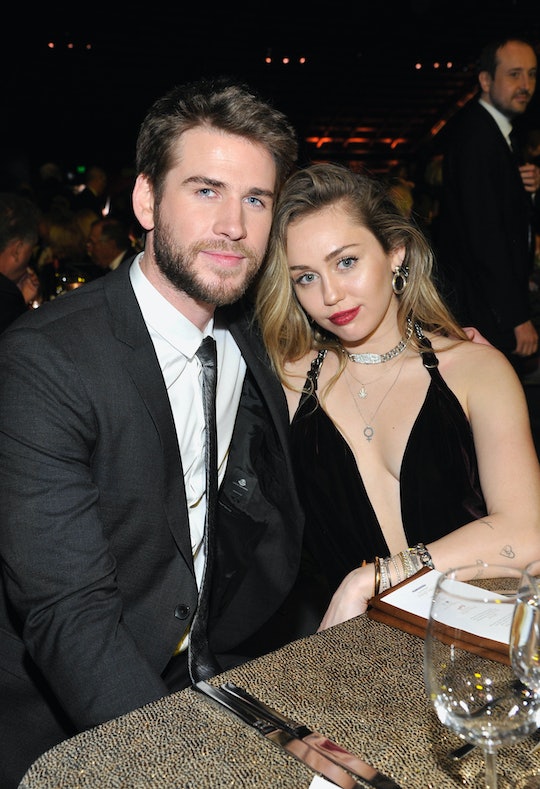 Miley Cyrus Is Performing At The 2019 Grammys, So Will Liam Hemsworth Be Her Date?

Ever since they confirmed their marriage, the world can't stop swooning over Miley Cyrus and Liam Hemsworth's sweet relationship. So with the 2019 Grammy Awards happening this Sunday, Feb. 10, and the 26-year-old singer slated to perform on the big stage, it seems fair to assume that Miley Cyrus is bringing Liam Hemsworth as her Grammys date. And I, for one, can't wait for the camera to pan to him and see what can only be the most adorable reaction to her singing her heart out.

After a decade together as a couple — after meeting on the set of The Last Song, according to the BBC —  Cyrus and Hemsworth officially tied the knot in December 2018, Us Weekly reported. The Hannah Montana alum confirmed the happy news with two heartwarming photos on Instagram, one of which she captioned, "This is probably our one – millionth kiss," as People reported. As for 28-year-old Hemsworth, he also posted a wedding photo of the pair dancing, confirming the news, with the caption, "My love."

The newlyweds are clearly head over heels in love, so it would be pretty surprising if Hemsworth is not his wife's plus one at the 2019 Grammys.

Ahead of the awards show, though, both Cyrus and Hemsworth have appeared to be pretty busy gearing up for their own projects and appearances. The songstress, for instance, has been sharing photos of her rehearsing with Shawn Mendes, who is nominated for his first Grammy and is also performing on Sunday night, as Billboard reported.

Leading up to Sunday's award show, Hemsworth appeared to be in New York doing some press. On Wednesday, for instance, he was a guest on The Tonight Show with Jimmy Fallon, and on Friday, he shared photos on his Instagram Story of his appearance on Good Morning America with Rebel Wilson, promoting their new film, Isn't It Romantic.

Though they're both busy with their careers right now, it seems like a fair bet that they'll be together on Sunday given how much Hemsworth gushes about his talented wife. In 2016, for instance, after Cyrus was listed as an honoree for Variety's 2016 Power of Women, Hemsworth told Access Hollywood that he was "very proud of her."

"You know, I think she loves everyone. I think her whole way of being is loving... I’m really happy for her that she's receiving that award," he told Access Hollywood at the time. "I think she's doing things for the right reason and trying to make the world a better place. And being in a position of power like she is, she has a huge impact on young people and her fans. I think everything she's doing is about loving each other."

And as for Cyrus, it seems that she wouldn't want to have anyone else but her supportive husband sitting next to her as she prepares for her Grammys performance. This was clear even back in 2009, when she did an interview with Seventeen. As MTV News reported, Cyrus said of Hemsworth at the time:

All you want is for one person to say, "You did a really good job today." Or "You look really beautiful," or "I was really moved by that," ... You just want one person to make you feel good about something you're doing. Liam has been a big part of that.

On Sunday, Cyrus and Mendes are expected to perform a tribute to Dolly Parton, according to Entertainment Tonight. And with a cheerleader like Hemsworth in her life, it seems safe to assume that he'll be rooting for her in the audience at the Grammys as the rest of wait for his sweet reactions.