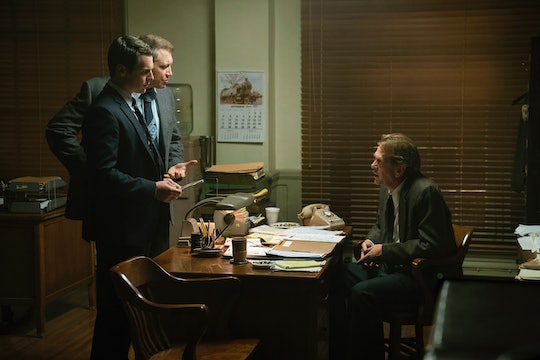 If you're anything like me then you're fascinated by crime stories, particularly true crime, or stories about serial killers. I know I'm not alone in this if only because Netflix keeps coming out with more crime series, like their newest offering Mindhunter. So is this another true crime story or is it fiction? Is Mindhunter based on a book? While there will definitely be fictional elements to the show, they are, in fact, based on a true crime book by John E. Douglas called Mindhunter: Inside the FBI's Elite Serial Crime Unit., which tells about the start of psychological profiling in the 1970s.

The series is centered around two FBI agents, Holden Ford and Bill Tench played by Jonathan Groff and Holt McCallany who freak the other FBI agents out when they hold long and intimate conversations with serial killers (before the phrase "serial killer" was even a term) in an effort to understand what's going on in their heads. "How do we get ahead of crazy if we don’t know how crazy thinks?" McCallany's Tench asked, thus summing up the whole point of the series. This show is about psychology as much as literal thrills. It is set at the very beginning psychological profiling, which we all know now as the most interesting part of those psychological thrillers we apparently can't get enough of.

In the series, the character Holden Ford is based on real-life FBI agent John Douglas, who wrote the book that inspired the show. Before Douglas, psychology, particularly the psychology of the deranged killers the FBI pursued, wasn't taken very seriously by Douglas's colleagues. In his 25 years as an agent for the FBI, Douglas took on a sort of legendary status. This Netflix series isn't even the first time he's been used as a character inspiration. The character of Jack Crawford from Silence of the Lambs was directly inspired by Douglas. He also served as the inspiration behind the character Jason Gideon on Criminal Minds.

So while this new show on Netflix isn't technically true crime in the traditional sense of the word (though if that's your thing, Netflix has plenty of options for you), it is based on real events. Personally, I'm looking forward to the series, which I am envisioning as a slightly less creepy and longer version of Silence of the Lambs. It is executive produced by Charlize Theron and David Fincher, which sounds extremely promising. The LA Times reports that Theron became familiar with Douglas's work when she was researching her serial killer character Aileen Wuornos for the film Monster, for which she won an Oscar.

Theron told the paper, "I always want to know why. Why is it that somebody has the need to control in the ultimate way like Berkowitz did or [so-called ‘Co-ed Killer’] Ed Kemper did? A lot of people think it’s really strange, my mother included, but I think it’s healthy to want to turn the light on and want to understand something that’s scary." Douglas seemed to also want to know why, and his work greatly contributed to law enforcement practices today. Even though getting there must have been extremely disturbing.

In the same article, Groff notes that though he read the source material, he is not as interested in serial killers as some of his collaborators. "When I first picked up the book, it took me a long time to get through it because I found it so disturbing," he said.

But at this point there's no denying the horrifying fascination that killers hold for audiences at large. I am living proof. And with David Fincher at the wheel, I have no doubt that this series will be just the right amount of compelling and creepy.