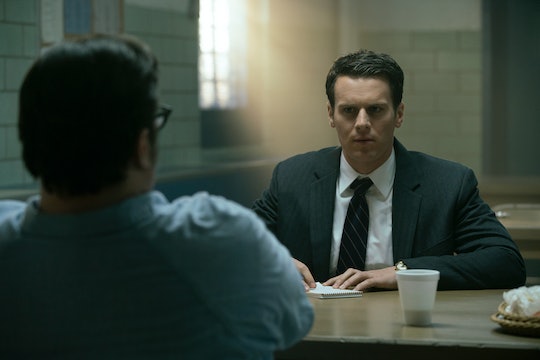 The first season of Netflix's Mindhunter blended fictional protagonists with true crime cases that were all too real. It was based on the memoir of an actual FBI agent, but took some liberties when it came to the non-criminal aspects. It seems the same will be true for the second season. Mindhunter Season 2 is based on a true story as well, though it's another case of mixing real events with invented elements.

To be completely clear: Holden Ford (Jonathan Groff), Bill Tench (Holt McCallany), and Wendy Carr (Anna Torv) are all fiction. Though inspiration was gleaned from Mindhunter: Inside the FBI's Elite Serial Crime Unit by John E. Douglas and Mark Olshaker, the show didn't hesitate to go off book when it came to its characters' personal lives. However, every time one of the agents sat down with an actual serial killer, like Cameron Britton's terrifying Ed Kemper, that was based on real events.

And these mostly made up investigators are once again getting embroiled in some actual cases in Season 2. Specifically, the show will be taking a closer look at the still-unsolved Atlanta child murders and the crimes of the BTK Strangler. Charles Manson and David Berkowitz may also be sitting on the other side of the interview table, according to Entertainment Weekly.

Dennis Rader, nicknamed the BTK Strangler because he would bind, torture, and kill his victims, was a mysterious presence in Season 1 of Mindhunter. His ten murders occurred from 1974 to 1991 in Kansas, though he wasn't arrested until 2005, per People. The (again, fictionalized) character can be spotted briefly in the Season 2 trailer, though it's unlikely he'll end up getting caught since that wouldn't reflect what happened in real life. While talking to Refinery29, McCallany admitted, "These guys don't solve all of their cases. You don't get to solve them all in real life, and you don't get to solve them all in Mindhunter."

The Atlanta child killings may remain similarly unsolved on the show, because no one has been convicted for them in real life, either. The exact number of victims in unclear, but over 20 children were killed in Atlanta, Georgia from 1979 to 1981, as reported by People. A man named Wayne Williams was cited as the chief suspect, and he is currently in jail for the murder of two adults, but he maintained his innocence and was never charged for these specific crimes.

Manson and Berkowitz might already be well-known to the audience because of how famous their respective crime sprees were. Manson did not physically commit any murders himself, but encouraged his followers to do so, resulting in the deaths of at least nine people, per Good Housekeeping. Holden wanted a chance to interview Manson in Season 1 of Mindhunter but couldn't swing it; since Damon Herriman has been cast in the role in Season 2, it seems like Holden will finally sit down with the cult leader.

David Berkowitz, called the Son of Sam because he claimed his neighbor's dog Sam was urging him to kill, was known for allegedly targeting women with long, dark hair, according to the New York Post. He shot 13 people in New York City in 1976, per the New York Daily News, resulting in six deaths and 7 injuries. He can be glimpsed in the Mindhunter Season 2 trailer as well, though it doesn't seem like the actor's name has been announced yet.

Mindhunter sticks to the facts when it comes to the serial killers featured on the show, casting actors who look surprisingly similar and presenting the details of the cases accurately. But the show relies on fiction, too, making it a combination of both.

More Like This
20 Heartwarming Episodes To Help Prepare Your Child For A New Sibling
'Virgin River' Has Wrapped Filming Season 5 & OMG Is Charmaine Still Pregnant!?
Rubble From 'PAW Patrol' Is Getting His Own Spinoff Series Full Of "Messy Demolition"
Here’s How To Watch Every 'Modern Family' Thanksgiving Episode