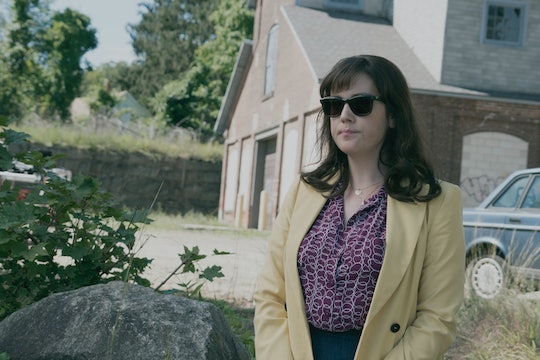 With a universe inspired by Stephen King, you can expect to find a few mysterious characters on Hulu’s new series, Castle Rock. The show tells the story of town with a complicated and ominous history, and its residents who all seem to be harboring their own share of dark secrets. The town’s real estate agent, Molly Strand (Melanie Lynskey), looks like a normal person on the outside, but seems to hear voices in her head. Is Molly psychic on Castle Rock, or is it something else?

Warning: Spoilers for Episode 3 of Castle Rock ahead.

From the looks of things, Molly just might be the real deal. In Episode 3, she shocked Henry Deaver (André Holland), by repeating his thoughts aloud during a TV interview with a local station. Before her interview, Molly confessed to Henry that she could hear and feel people’s thoughts like a song stuck in her head, but she could feel him more clearly than anyone else. “I feel things that other people are feeling, and some people are louder than others,” she tells him, “Things happen when we’re together, and it can be overwhelming, and sometimes I can lose track of myself.”

The incident Molly referred to in her outburst — in which a mysterious man was found hidden in the depths of Shawshank Prison — was being kept a secret, so there was no way for her to know those details. As she was being interviewed, she could hear Henry’s thoughts on the case, and revealed them live on the air.

And it looks like Molly's abilities are something she's been trying to manage for quite some time, now. In a series of flashbacks, Molly recounts her childhood connection to Henry. As a neighbor living down the road, she would often watch him through her window at night and when they were kids, she actually tried to explain it to him. “I can’t explain it but, I can hear what you’re thinking and feeling,” she tells a young Henry as he comes to hang out in her bedroom, “When you’re brushing your teeth, when your out there in the woods, it’s like I’m out there with you.”

When Henry’s dad, Reverend Deaver calls to him, Molly forms a fist just like Henry, and when Henry disappears in frigid temperatures, Molly is seen breathing out ice-cold air in the warmth of her home. So, not only does she hear Henry, she seems to physically manifest what he is feeling as well.

So how exactly do Molly’s psychic abilities work? Well, according to her, it has to do with the neurons in her brain. When talking to her sister at lunch, Molly insinuates that her condition stems from the nerves in the brain, called mirror neurons, which are responsible for empathy. While she doesn't get a chance to explain in further detail, it may be that her mirror neurons are just more sensitive, so they can pick up on other people’s thoughts and emotions. But living with voices in your head must be chaotic, which is why Molly needs to take pills like Percocet. She tells her sister, “I take half a pill, just once a day, to muffle other people’s noise.”

I think Molly’s psychic connection to Henry is what prompted her to disconnect his father’s ventilator. Most of the town thinks that Henry is to blame for his dad’s death, but in a flashback, you can see a young Molly calmly walking to his home in the middle of the night to kill him. Because she feels what Henry feels, it’s possible that she killed Rev. Deaver for hurting Henry, who she has an obvious crush on.

Exactly what went on between Henry and his dad is still unknown, but Molly’s memories and her psychic abilities seem to be the key to unraveling the mysteries surrounding the town.

Castle Rock airs with new episodes every Wednesday on Hulu.