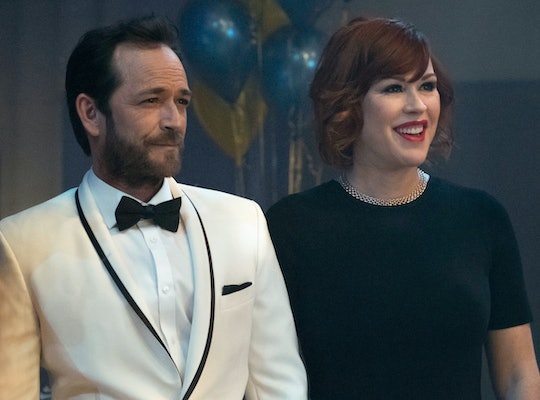 After the tragic death of actor Luke Perry, Riverdale fans are feeling the void he left behind. As Archie’s dad, Fred Andrews, he was a constant voice of reason in Archie’s life. Actress Molly Ringwald — who plays Archie’s mom, Mary Andrews — returned in the last few episodes to step in as Archie’s guiding light. But now that Fred is gone, many are wondering if Molly Ringwald is a regular character on Riverdale now.

There’s no way to know for sure, but it looks like Ringwald will be in the remaining few episodes of Season 3. In a trailer for Episode 20, titled “Prom Night,” you can see that Mary Andrews is back at home with Archie, giving him motherly advice about his future. “I’m not thinking about tomorrow,” she tells him, probably referring to his plans on starting a boxing career. “I’m thinking about the rest of your life.”

Archie Andrews isn’t great at making sound decisions. His naivety and inability to foresee consequences often land him in hot water, so he really needs a parental figure in his life to be there for him and give him constructive advice when he needs it (which is always). Since Mary moved away to Chicago (which was explained in Season 1), Fred became the parent Archie always leaned on for support. Showrunners haven’t revealed how they plan on addressing Fred’s absence from the show, but unless they decide to replace Perry with another actor, it’s safe to assume Archie’s dad will be written off the show.

When Perry passed this past March, just weeks after suffering a massive stroke, the news of his death came as a shock to fans, as well as showrunner, Roberto Aguirre-Sacasa, who told Entertainment Tonight that he needed time to process Perry’s loss before he could address the absence of his character.

“You know, honestly, we are I think all still in shock and are all still processing and grieving,” he said back in March. "We know that we have to address it in some way, but we’re giving ourselves a little bit of time and space before we figure out the best way to honor him. Luke was, is, and will always be a big part of Riverdale. We’re kind of a family and when a loss like this happens, you carry it always. — His spirit, which was so generous and wise and vivacious, we hope will infuse every episode, so in my mind, every episode for the rest of time on Riverdale will have a bit of Luke in it.”

It’s unclear what direction Archie’s parental storyline will take next season, but in an interview with Entertainment Tonight, KJ Apa said that he hoped Ringwald would step in with a more regular role. "We're definitely gonna obviously have to address it at some point," Apa said. "[Possibly] that [means] Molly stepping in as more of an active parent for Archie, but that all depends on the availability of the actors around us. So, you know, we'll do what we can."

With only one parent left in the equation, it makes complete sense for showrunners to bring Ringwald on as a regular. She’s an iconic actress, and her presence just adds to the series’ charm. Plus, as Mary, she could potentially fill the void left by Perry, by stepping in to become Archie’s much needed pillar of strength and support.