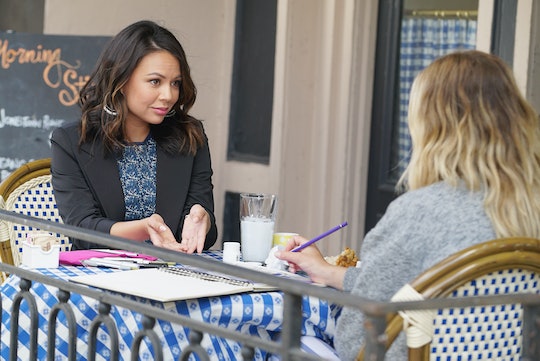 Mona Might Be Up To Something On 'Pretty Little Liars'

Despite the fact that Mona had moonlighted as A before, one would think she had more than proved herself as trustworthy after helping the Liars numerous times over the years. Mona made that point herself in Season 7B (and guilted Hanna in the process), but in "Driving Miss Crazy" it might have been revealed that she was just trying to throw suspicion off of herself. Mona might be hiding something big from the rest of the girls. Is Mona A.D. on Pretty Little Liars?

The show definitely wanted viewers to think that it was a possibility. When Mona returned to her apartment after a little investigating with Emily, the camera panned to her wall, where she had tacked up pictures of key players like Alison, Cece, and Jason along with all kinds of other information. It was hard to make all of it out, but there were definitely forms and police reports on the wall. The centerpiece was a giant picture of Liar's Lament, the game A.D. had been torturing the girls with — and the game that Mona was delightfully fascinated by. It looked exactly like the kind of plans A has made in the past, which could mean that Mona was up to old tricks.

It was made even more suspicious by the fact that Mona had a pile of shovels in the corner of her room that were presumably the very same shovels the girls had used to bury Elliot Rollins after killing him. The evidence was piling up that indicated she is A.D., or at least that she has some connection to A.D. She might not be the mastermind (as if, Mona is a genius) but she could be in cahoots with the person behind it all.

But then again, would Pretty Little Liars really reveal A.D.'s identity with several episodes left to go? When Charlotte DiLaurentis was revealed to be A, it was an incredibly dramatic sequence complete with gowns and a control room worthy of a maniacal supervillain. There's no way the show wouldn't milk A.D.'s real identity for all it was worth, holding off until the last possible moment for maximum drama.

If the Mona reveal was a red herring, then she must have another reason for all that incriminating evidence in her apartment. That reason could be the very thing she told to Hanna just an episode or so ago: she wants to help and she wants to protect the girls. By taking the shovels, she was keeping them from being incriminated. The Liar's Lament blueprint was another effort to figure out how the game worked. All of the other information Mona had gathered could have a simple explanation: she is looking out for the girls in the most intense way possible. Classic Mona.

But even if Mona isn't A.D., she is still hiding something. Only time will tell exactly what that something might be.