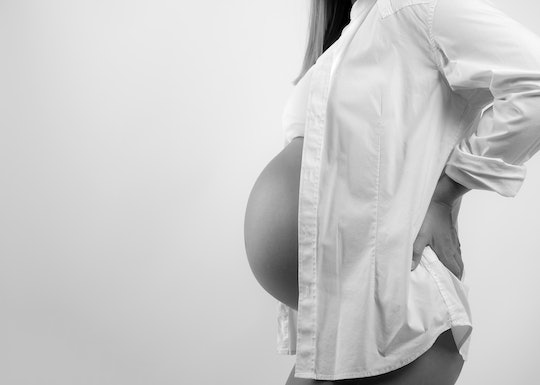 Is Morning Sickness A Sign Of Good Prenatal Health? A New Study Says It Just Might Be

If you're worrying about your morning sickness and its potential negative effects on your baby, you really shouldn't; Nausea and vomiting may even be symptoms to be thankful for. Could it be? Is morning sickness a sign of good prenatal health? A new study has found that, yes, the presence of morning sickness may correlate with a "reduced risk for pregnancy loss."

Call it an old wives' tale or urban myth, but the idea that a sick pregnancy leads to a healthy baby has been adopted by many, though it hasn't yet had the scientific backing needed to be legitimized. Published in JAMA Internal Medicine, this recent morning sickness study examined women who'd suffered pregnancy losses in the past. The researchers ultimately found that, in these women who've experienced one to two prior pregnancy losses, the presence of nausea and vomiting while pregnant "associated with a 50% to 75% reduction in the risk for pregnancy loss."

It should be noted that, as far as demographics are concerned, the study was quite limited. Of the 797 women involved in the study, the overwhelming majority of participants were white (96 percent), married (95 percent), employed (72 percent) and under 29 years of age (63 percent), as The Chicago Tribune pointed out.

Staff scientist Stefanie N. Hinkle from the U.S. National Institutes of Health and lead researcher for the study notes that the findings were remarkable because they were able to "[evaluate] symptoms from the earliest weeks of pregnancy, immediately after conception." The 797 pregnant mothers kept daily records of their symptoms, beginning in their second week of pregnancy and continuing in detail for the next six. After this, they submitted monthly questionnaires of a similar nature, describing their symptoms.

"We hypothesize that there is a more direct biological link going on between nausea and vomiting and pregnancy loss, although our data can’t inform exactly what that is," Hinkle told TIME, recommending that more research needs to be done on the topic before any definitive conclusions are drawn. Overall, these findings "should provide some solace and reassurance to women experiencing these symptoms that they have a healthy pregnancy," Hinkle noted, though, due to many other, unmeasured factors, the absence of nausea or vomiting should not alarm mothers, either.

If you're experiencing sickness in your pregnancy, it's likely a "biological link" and, although it can be quite uncomfortable, it isn't something you need to worry about. Every pregnancy is unique and studies like this one help can help mothers at all different stages to better understand both what their bodies are going through and why.