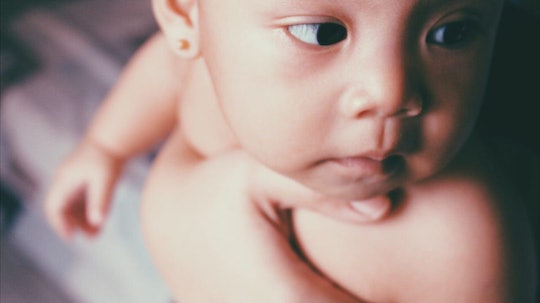 How To Tell If Baby Is Really Saying "Mama"

You've seen it happen. You're hanging out with a friend and their baby utters some nonsense and your friend is positive their baby just said "mama." You, however, are unconvinced. But then, a few months later, with your baby in your arms, you're in the same position. And you're thinking, "Oh my gosh, did that just happen? Did I just hit a major baby milestone? Or am I imagining things? Is my baby really saying "mama" or just babbling adorably and incoherently and I'm just so sleep deprived that I've begun hearing things?"

Depending on how far along your baby is in their motor skills, it could really be either. According to Kids Health, you'll first hear your baby utter "mama" between 8 and 12 months (they may say "dada" too, but you know you're rooting for "mama.") In general, you can count on anything that comes before that to be mostly nonsense and adorable babble. Parents reported that most babies begin cooing, ahhing, and sharing more nondescript vowel-based language around 2 to 3 months, and that babble with multiple consonants involved usually starts around 4 months. Dr. Diane Paul, director of clinical issues in speech-language pathology at the American Speech-Language-Hearing Association told the publication that the most common consonants babies latch onto first are p, b, and m, because they involve the simplicity of putting their lips together.

While your baby's babbling, keep in mind that you'll want to engage with them and their babble, even before it begins to mean anything at all. Sherry Artemenko, a speech-language pathologist and founder of Play on Words told Parents that research shows that the more words you speak to your baby, the more positive an effect it has on your baby's language development. The Guardian reported that Anne Fernald, a developmental psychologist and professor at Stanford University recommended speaking regularly to your baby from day one. "You need to start talking to them from day one," Fernald said at the American Association for the Advancement of Science annual meeting in Chicago. "You are building a mind, a mind that can conceptualize, that can think about the past and the future."

Though you might think waiting to hear "mama" might be a bit of a stretch as far as your baby conceptualizing goes, Parents experts begged to differ. According to Paul, around 6 to 7 months is when your baby's babbling becomes more speech like, and if you listen closely, you can hear changes in inflection and tone when your baby's babbling. And explaining your baby's babble to him or her is key in development. So when your baby says "bababababamuhmuh," don't just coo and coddle back, translate it for them. Guess what they might be babbling about, and begin to correlate their babbles with words and actions.

Once your baby begins to say "mama" and more, keep encouraging them. The more you speak to them, teach them, and encourage them, the more words they'll obtain in their vocabulary. According to Parenting, about one in four children is a late talker. So while the norm is by 15 months, your child should be saying between 30 and 50 words, you may have a late bloomer on your hands. Dr. Leslie Rescorla, director of the Child Study Institute at Bryn Mawr College, told the publication that around 2 and a half years is when you should seek professional help, as this is usually when late bloomers tend to catch up with their speedy-speaking counterparts.

Your baby's first words are an exciting milestone, one you're not likely to forget. But keep in mind that every child develops at their own pace, and regardless of whether your baby is an early or late comer to the "mama" train, it rarely has an impact on their communication skills later in life. So when your baby's babbling and begins to speak, encouragement is key. After all, the more you encourage and engage with your baby's communication skills, the better.