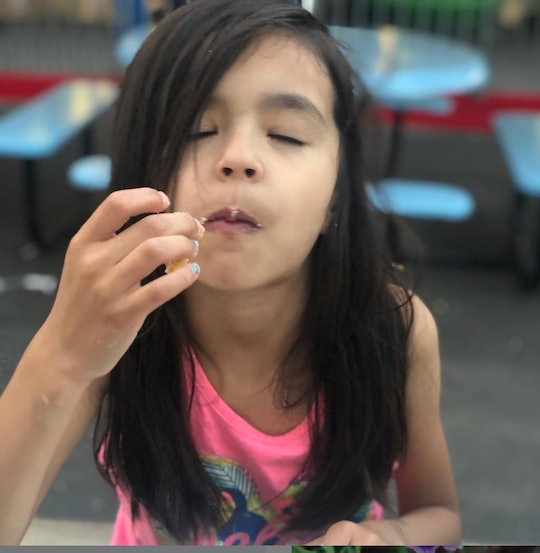 Here's How To Tell If Your Kid's A Picky Eater, Or Actually A Supertaster

I have a child who will turn away almost all foods. She has a very limited idea of what she should be eating, and it's mostly limited to oatmeal, bread, crackers, mangos, and macaroni and cheese. Getting her to eat much of anything else is a near impossibility. Most vegetables are too bitter, meat is too dead, and everything could be covered in copious amounts of butter — making it taste better. I've had people ask if my child is a supertaster, and while I know it's possible, I really do hope she's just picky.

If you're unfamiliar with the term, a supertaster is exactly what it sounds like: someone who tastes food more intensely than other people, according to the journal Chemical Senses. Surprisingly, National Geographic reported that one in four of us are, in fact, supertasters. These hypersensitive human flavor detectors tend to be picky eaters, because they are assaulted with a wider variety of flavors with even the most benign food. Broccoli becomes impossibly sulphuric, foods that are too sweet are unpalatable, and spicy foods overwhelm their senses. The journal noted that it could be linked to a specific gene that develops the fungiform papillae (the visible taste buds on the tip of the tongue). The quality and density of these fungiform papillae on supertasters is much greater than the general population.

Researchers also posited that there is a relation between the ability to detect scents and the ability to detect flavors, and that supertasters might also be super-smellers, suggesting that there is a difference in the brain that allows the two to work together with greater accuracy than regular or non-tasters. If your little picky eater is also really sensitive to smells, they might be a supertaster. Similarly, supertasters can detect the intensity of a flavor with an almost preternatural specificity, making them in high-demand in occupations like wine tasting.

My daughter is also incredibly perceptive to smells. Just last night, hours after I'd bleached the bathroom (I have an 11-year-old boy, so this is a frequent occurrence) she asked me "Can I bathe in your bathroom? Mine smells like a pool, and I won't be able to enjoy my bath bomb." (She's also truly into bath bombs.) According to the journal, this might indicate that she's a supertaster.

The difficulty in determining if she's a supertaster is that the science of taste isn't exact, noted Harvard University. It's a spectrum. Your child might be an especially good taster and have a terrific olfactory sense, but they might not be a true supertaster. Being the spectrum that it is, it makes sense that you could have one child who will eat everything you put in front of them, add hot sauce to boot, and one who eschews all but the blandest of flavors.

It gets even more interesting when you consider that the quantity of fat is also detectable by supertasters, according to Harvard. This is notable because the five main "flavors" have been set in stone for some time: sweet, salty, sour, bitter, and umami. However, in the past decade, research has increasingly shown that fat is not just a carrier of flavor, but a flavor all on its own — that also amplifies the flavors surrounding it. (If you pair fat with something bitter, the bitter it becomes more bitter. The same for the other flavors.)

For the 25 percent of people who are supertasters, childhood is a challenging time. Their mouths and brains are telling them one thing, and we're telling them another. Carole Lieberman, MD, a Beverly Hills-based psychiatrist, told Yahoo Parents that "unlike picky eaters, whose behavior can be a warning sign of deeper emotional problems, the behavior of supertasters is a reflection of their anatomy." She noted that if your child vacillates on what foods they like when, they're likely just a picky eater, but if they turn their nose up at all strong flavors, and complain that foods are "too bitter," "too sweet," or "burns their tongue," you might have yourself a little supertaster. In which case, I wish you luck, because mealtimes are a trip.

Personally, I'm just hoping that my daughter can parlay her skills into becoming a master wine taster or perfumer, sending her dear mother home samples to make up for the short order cooking I did for her as a child.