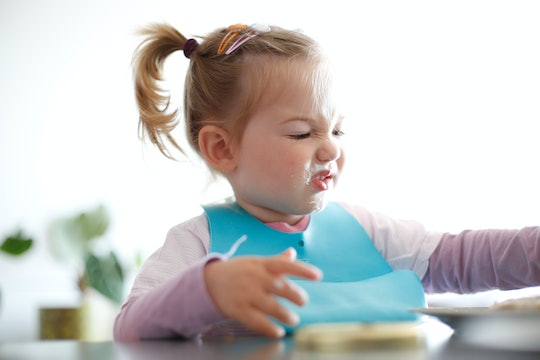 Don't Brush Off Your Child's Picky Eating Just Yet

Pasta with only butter, peanut butter sandwich with the crusts cut off, plain white rice, french fries with no seasoning, macaroni and cheese, and chicken nuggets. If you have a child who's a picky eater, you're probably quite familiar with this list of foods, as they're the only ones they'll eat. Picky eating can make dinnertime a hassle, and often limits your options when dining out as a family. It's a concern for many parents who may wonder, "is my kid's picky eating normal?"

Many children go through a phase where they start to become picky about their food. Sociologist Dr. Dina Rose noted on her website that it is estimated that anywhere between 5 to 25 percent of kids are picky eaters. The reluctance to eat or avoidance of new foods, also known as food neophobia, peaks in children at around 2 to 6 years of age, but typically gets better as they enter school, according to registered dietitian Maryann Jacobsen. But, if a child's pickiness toward food doesn't improve by age 6, there may be a bigger problem which needs to be addressed.

Not all pickiness is the same. According to WebMD, about 18 percent of kids are considered moderately picky eaters who will eat limited food, often requiring their parents to make special meals for them. Severely picky eaters, about 3 percent of kids, are so selective that it can interfere with family life. They might skip social activities because they are concerned about what will be on the menu, or they may bring their own food.

A child who is severely picky, may actually have a condition known as Avoidant Restrictive Food Intake Disorder (ARFID) formerly known as Selective Eating Disorder (SED). Jacobsen noted that when kids with ARFID try new foods, they can choke, gag, or vomit, and the condition can last into adulthood. Mass General Hospital in Boston's Eating Disorders Clinical and Research Program is currently conducting a two year study on what triggers ARFID and how to treat it. WCBV 5 reported that the MGH researchers are focusing on three causes of ARFID:

Unlike other eating disorders, kids with ARFID aren't trying to lose weight or change their bodies. In fact, most kids who are severely picky eaters want to be able to change their eating habits. Nutrition therapist Diane Keddy explained on Jacobsen's site that this kind of pickiness is neurological, because the part of the child's brain that recognizes food as pleasure is underdeveloped. She warned that kids with a family history of eating disorders or OCD, and those who with autism spectrum disorders (ASD) and anxiety are at greater risk of become severely picky eaters.

According to a WebMD interview with Dr. William Copeland, associate professor of psychiatry at Duke University School of Medicine, picky eating can also be a red flag that your child is struggling in terms of emotional or behavioral functioning. Copeland noted that both moderate and severe picky eating are linked with reduced growth, and kids who have the severe type are twice as likely to have behavior problems outside the home.

Picky eating can be more than just a harmless phase for some kids. Dr. William Muinos, the director of the weight management program at Nicklaus Children's Hospital, told WebMD that parents should seek medical intervention if their child's pickiness becomes moderate or severe, regardless of age.