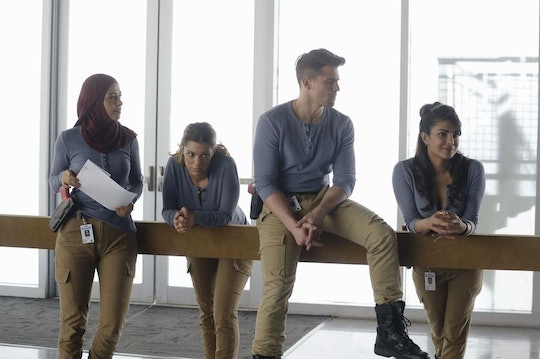 Is Natalie Dead On 'Quantico'? The Second Bomber Just Killed Another Agent

(Spoilers from Quantico episode "Clear.") Well, we've lost another good one on Quantico. Ever since the second bomb went off in the winter finale, Quantico agents have been dropping like flies, the most recent one being Natalie Vasquez. After an anxiety-ridden episode with a bomb attached to her abdomen, Natalie seems to have died on Quantico, thanks to the bomber who has been taunting Alex since the midseason premiere. And, after this death, I think we can officially agree that Alex has become unhinged, and you can't blame her.

On the midseason premiere, Alex received a phone call — presumably from the bomber of the FBI command center — instructing her to obtain classified information or else Natalie (who had a bomb strapped to her body) would die. The bomber wanted the schedules of all of the presidential candidates for their records, as Natalie said, making them sitting ducks. Alex and Natalie, after some illegal activity, sent the records to the bomber, deactivating the bomb on Natalie and saving her life. The two former foes also attached a worm to the email, allowing them to trace the information to a warehouse where they'd hopefully be able to put an end to the madness once and for all.

Unfortunately, when the two got to the warehouse, they only found a computer with the information they sent. The person that had been threatening their lives was nowhere to be seen. That's when it happened — while Alex answered a phone call from the bomber, Natalie poked through the computer to see what the bomber was looking for. Alex left the warehouse just when Natalie realized that the computer she was looking at was triggered with an explosive, setting it off and presumably killing her instantly.

And just like that, another NAT-turned agent was killed. Natalie's death was particularly sad, since this entire episode was laying the groundwork for a friendship between Natalie and Alex that will never be explored now. Natalie's death also marks the first death of one of the NATs, not counting Elias Harper. Her death also sent Alex into a downward spiral, understandably so. Alex ran herself to Booth's apartment and begged him to commit her somewhere, just when she realized that the bomber was stalking her at Booth's, too. Basically, Alex isn't safe anywhere, and that's completely terrifying.

While we can't be 100 percent sure that Natalie is dead, I don't think she's going to survive that explosion. Alex is probably realizing that no matter what she does, she's putting so many people's lives at risk. Why is this bomber going after her and the ones she cares about? The more people that die, the shorter the suspect list goes — although I don't know if that's necessarily a good thing.